Members of the DAR Spencer Clack Chapter from Sevierville, Tenn. and students from the New Kituwah Academy pose with school supply gifts the Chapter brought to the students during an event at the Qualla Public Library on Thursday, Nov. 15. (SCOTT MCKIE B.P./One Feather photos)

Christmas came early for students at the New Kituwah Academy.  Members of the Spencer Clack Chapter of DAR (Daughters of the American Revolution) from Sevierville, Tenn. brought school supplies for the students.

The supplies were presented to New Kituwah students in the 3-4 year old and pre-K classrooms during at event at the Qualla Public Library on Thursday, Nov. 15.  Prior to the presentation, the students performed the Cherokee Buffalo dance for the DAR members present. 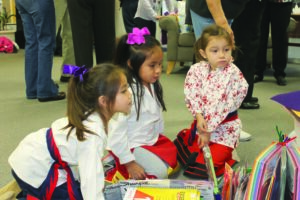 “This is our pleasure,” said Clellene Cole, Regent of the Spencer Clack Chapter.  “These kids are our future.  We’re pleased to be here, and hope to be back to with more things.”

Cole related that a chapter member named Linda Jones visited the Qualla Public Library earlier in the year.  “She happened to be here when the children were here, and they were learning their language and singing in their language.  She became very interested in trying to help this library and help this program with the needs that they had.”

“We don’t receive a lot of recognition, but the kids get asked to perform a lot and come out and do different ceremonies and stuff, and it’s rare that an organization demonstrates such gratitude the way that they have,” said Renissa McLaughlin, New Kituwah program manager.  “We’re just really grateful because there are a lot of agencies, entities, universities and schools out there that really are supportive of what we do at Immersion so anytime that people give back to us it’s a blessing.”

The DAR Spencer Clack Chapter was formed on May 23, 1928 in honor of Lt. Spencer Clack, an American Revolution soldier from Virginia.  Following the war, Clack relocated to Sevier County, Tenn. and was involved in the area’s growth including serving on the first constitutional convention of Tennessee.