HIS MEDALS ARE HOME

Pfc. Charles George is an American and Cherokee hero.  He sacrificed his life to save his comrades in 1952 in the Korean War and won the Medal of Honor and other awards for his heroic actions. 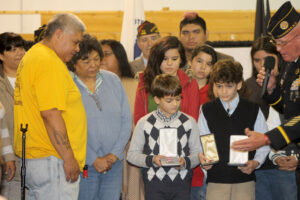 Sixty years later, three of his medals were returned to the George family by two New York young men who happened upon them in an antique store in Newburg, NY.  Michael Mazzariello, 11, and his brother, Mauro, 8, found the medals in the store while searching for a G.I. Joe doll.

The medals were returned during the Veteran’s Day ceremony at the Cherokee Indian Fairgrounds on Monday, Nov. 12.

The medals, which included a Bronze Star, a Purple Heart, and a Good Conduct Medal, were inscribed with the name “Charles George” so the boys began a quest to find out who he was and where his family is now.

Michael Mazzariello related, “We were looking for an action hero figure and came out with a true American hero’s war medals belonging to Charles George.”

Michael said the medals were for sale for $450, but they persuaded the owner to give them the medals on the condition that they find the rightful owner. 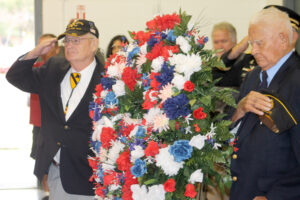 Michael and Mauro contacted numerous people and agencies on their search for Charles George’s family including the National Purple Heart Hall of Honor, Senators, Congressman and even wrote a letter to the President.

The boys found a video online on the renaming of the VA Hospital in Asheville after Charles George and contacted Warren Dupree, Post 143 Service Officer, who was featured in the video.  Dupree related that he received an email from the Mazzariello family in April on the subject of the medals.  This set the wheels in motion for the medals to be returned during Monday’s event.

“As both of our grandfathers served in World War II and our uncle Tony served in Vietnam, we had heard the stories of real life veteran’s struggles,” said Mauro Mazzariello.  “It’s real.  It’s not a video game.”

“It is only now that Michael and I can rest knowing that the tribal leaders and the family of Charles George have in possession the medals that belong to them.” 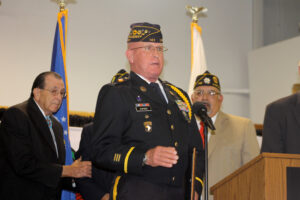 Patty Buchanan, a relative of Pfc. George, said, “On behalf of the George family, we would like to thank them very much.  We really do appreciate it.”

Commander Ernie Ellis, North Carolina State VFW Vice Commander, commented, “Private George sacrificed his life by putting himself between certain death and his fellow soldiers.  With his act of immeasurable courage, Private Charles George was awarded the Congressional Medal of Honor, this country’s highest award.  His actions define the meaning of above and beyond and call of duty.”

Ellis continued, “It is unknown how three of his medals ended up in a store in New York, but we do owe a special thanks to the Mazzariello family for recognizing the importance of the medals they discovered.”

Dupree said George “is not only an American hero, but a Tribal treasure”.

“Pfc. George gave his life for his fellow soldiers, for his buddies.  There is no greater honor than to sacrifice and to make the supreme sacrifice as he did.  His memory must never be forgotten, nor will it because the Eastern Band of Cherokee Indians, his fellow veterans, will always remember his sacrifice.”

Lewis Harding, Post 143 Commander, said of veterans, “We remember how they set aside their lives and their civilian pursuits to serve their country…The accomplishments of those warriors shows the determination of this country to hold the banner high and shine the light of freedom no matter what the cost.”

Several awards were presented during Monday’s Ceremony including:

Ray Kinsland gave the key note speech at Monday’s event and spoke about faithfulness of service.  “We are eternally grateful to you your service.  You serve in the noble tradition of selfless service.”

During his speech, Kinsland read excerpts from letters written to veterans from Cherokee High School freshman.  One such letter from Aubrey Little read, “I want to say thank you for service this country and giving Native Americans the freedom that we enjoy.”

For more photos of this event, visit the One Feather photo gallery at: https://www.theonefeather.com/photo-galleries-2/