ROBBINSVILLE – Famed Cherokee warrior and leader Junaluska was honored in a ceremony on Friday, Nov. 9.  EBCI tribal members Zane Wachacha and Jennie Junaluska, a descendant of Junaluska, placed a wreath at his gravesite located near Robbinsville. 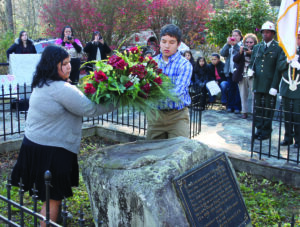 Jennie Junaluska, a descendant of Junaluska, and Zane Wachacha place a wreath at the gravesite of Cherokee warrior and leader Junaluska during a ceremony on Friday, Nov. 9. (SCOTT MCKIE B.P./One Feather photos)

“We’re here to honor a man who played a major part in Cherokee history and a major part in American history,” said Vice Chief Larry Blythe.  “When you look at what transpired as Junaluska saved the life of a future United States president, and you have to wonder sometimes how he felt.  He did his duty to America, and, in return, America totally disgraced themselves by the removal of our people.”

Junaluska saved the life of then Lt. Col. Andrew Jackson at the Battle of Horseshoe Bend in 1814.  Years later, President Jackson ordered the removal of Cherokee people to Oklahoma with the Indian Removal Act. 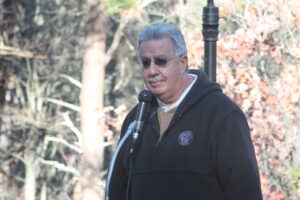 Miss Cherokee 2012 Karyl Frankiewicz was present and commented, “This is a very important person that has re-writen history.  He was a great man in our history.”

T.J. Holland, Junaluska Museum director, gave a brief account of Junaluska’s life and his place in history.  “Thanks to our grandfathers and the forebears of the Eastern Band, we are here today.”

For more photos of this event, please visit the One Feather photo galleries at: https://www.theonefeather.com/photo-galleries-2/