SNOWBIRD – A project nine years in the making is now underway in the Snowbird Community.  A groundbreaking ceremony was held for the Snowbird Youth Center on Thursday, Nov. 8. 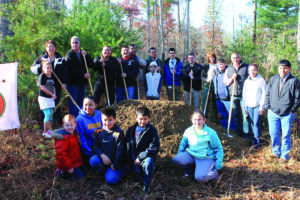 Tribal leaders and officials are joined by children from the Snowbird Youth Center for a groundbreaking ceremony on Thursday, Nov. 8 for the Center’s new facility. (SCOTT MCKIE B.P./One Feather)

The 15,000 square foot facility will be built on about 10 acres of U.S. Forest Service land near Robbinsville.  The Center, which is expected to be completed in 15 months, will cost $4.5 million and is being funded by the Eastern Band of Cherokee Indians.

Due to the lack of a suitable site on EBCI trust lands in the area, the Tribe entered into a 25-year lease with the Forest Service for the Center.

Principal Chief Michell Hicks said the project has taken awhile to come to fruition, but related that it was never forgotten about or put on the back burner. 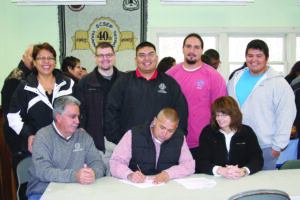 Chief Hicks noted that in the future he would like to see a Cherokee language immersion school built in the community.

Vice Chief Larry Blythe commented, “It’s a shared vision for creating what I call a training center for life skills for these youth, and that’s really what this project is about.”

“You’ve got to have a safe, friendly and appealing environment, and presently, if you’ve been to the Center, it’s an inadequate space, but the staff has done a great job with what they have to work with.”

Kristen Bell, U.S. Forest Service, said, “I am very much proud and glad that we were able to help make this happen, and I hope that this is just the beginning of a lot of good partnership work we will continue to do with the Eastern Band of Cherokee.”

Cherokee County – Snowbird Rep. Diamond Brown told the crowd that on a previous trip to the site he found a tail feather of a Red-tailed Hawk and knew then that was the site the Center should be built on.  “I look at these old signs…I’m talking old-time Cherokee traditional ways, and when I saw that tail feather that told me right then that this is the right place.  This is supposed to be here.”

“I think it’s great that we can finally start moving forward, that Snowbird can finally get some of these projects thanks to the Chiefs, Council and all of these people working together to make these things happen for our people down here in Snowbird.  It is a good day.”

Cherokee County – Snowbird Rep. Adam Wachacha said, “I know it’s taken a long time.  It’s been a long time coming, and our people are so proud of it.  It’s for the kids, that’s the main thing.”

He thanked many people who worked on the project including former Cherokee County – Snowbird Reps. Abe Wachacha, Brenda Norville, Glenda Sanders and Angela Kephart.  “I would like to thank everybody who worked on this over years.”

Abe Wachacha was presented and noted, “We’re all proud.  The kids are proud…I think now we can move on.  We finally got what we’ve been asking for for a long time, and we’re just so happy that we’re finally getting a piece of the pie that we’ve always argued about in Cherokee.”

Jokingly, he added, “And, we’ll be getting more than crumbs now and we appreciate that.  I just want to thank the Chief and the Vice Chief for all your support all these years and thank you for all of the Council that kept supporting us and working with us.”