The Cherokee Chapter of the North American Indian Women’s Association (NAIWA) hosted the annual National Conference this week.  Participants came from state chapters all over the country including South Dakota, New Mexico, Oklahoma and New York. 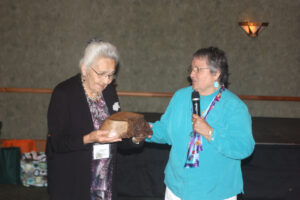 The event featured meetings, a memorial event, a banquet, and various social activities including trips to see the “Unto These Hills” drama and the Elvis Museum in the Wolftown Community.

The conference culminated with the banquet held at Harrah’s Cherokee Casino & Hotel on Thursday, June 7.  A local group known as the Historical Traditional Dancers opened the night with several Cherokee dances including the Corn Dance, Bear Dance, Buffalo Dance and the Friendship Dance.

The Ruth Littlejohn Community Service Award scholarship was awarded to Marvel Welch for her service to the community and Tribe.  The scholarship was started in 1981 in honor of Littlejohn who is the mother of current NAIWA member Carmaleta Monteith. 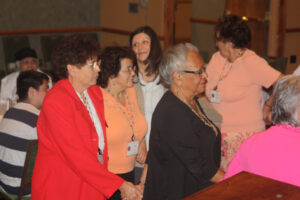 Marcella LeBeau, an elder from the Cheyenne River Sioux Tribe in South Dakota, was a founding member of NAIWA and was present for the conference.  Monteith recognized her for her contributions over the years and presented her with a Cherokee carved wooden bowl.

Marcella served in WWII in the Army Nurse Corps as a 1st Lieutenant.  She received the French Legion of Honor award among others.

“The North American Indian Women’s Association was founded back in 1970,” said Marcella LeBeau.  “And, we have good goals and purposes.  We’ve met women throughout the United States who are honorable, wonderful women in their communities and are very knowledgeable of their culture and traditions.  And, I think it’s because of the friendships that we make that keeps us going as a strong organization.”

A silent auction was also held during the event with proceeds going as seed money to help with next year’s National Conference, but the highlight of the evening and possibly the conference was the Elvis impersonator.

For more photos of this event, please visit the One Feather photo gallery at: https://www.theonefeather.com/photo-galleries-2/