McCoy makes history as a freshman

Spencer McCoy has made history…as a freshman.  The EBCI tribal member was named Most Valuable Male Athlete for 2011-12 at Robbinsville High School, and according to school officials is the first freshman to ever be named All-Conference in football in Smoky Mountain Conference history. 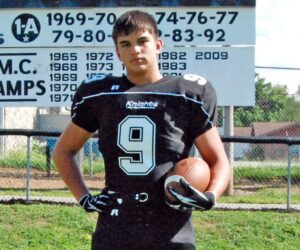 Spencer McCoy made history this past year by being the first freshman to ever be named Most Valuable Male Athlete at Robbinsville High School. (Photo courtesy of Zelerie Rose/The Graham Star)

“This is a great honor and a privilege to receive an award of this caliber,” said McCoy.  “Hard work and dedication anchored by the faith in my personal Lord and Savior Jesus Christ, along with the support of my coaches, family and friends, have made this possible.”

As a linebacker for the Black Knights, he led the team with 121 tackles.

He also wrestles and won the SMC championship at 195lb and was named Most Outstanding Wrestler at the SMC Tournament.  McCoy went on to take 4th place at the both the regional and state wrestling tournaments and became the first freshman in RHS history to place at the state tournament.

And, McCoy isn’t just a jock…he can crack a book too.  This past school year, he received an EBCI Tribal Merit Award and a RHS Academic Excellence Award.

“We cannot begin to tell you how proud we are of Spencer as a family,” said his father, Skooter McCoy.  “He has displayed strength in all areas of life starting with his faith in the Lord, caring for his family and friends and a tough work ethic that promotes excellence in academics as well as athletics.  Spencer has a desire to be successful at whatever challenges he endeavors.  We have truly been blessed as a family.”