Biologists at Great Smoky Mountains National Park have confirmed that both a tricolored and a little brown bat found in a park cave tested positive for white-nose syndrome (WNS). This discovery transitions the park from only finding evidence of the fungus that causes WNS in a cave to now finding animals actively affected by the disease. 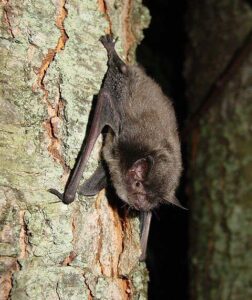 Great Smoky Mountains is home to eleven bat species and the largest hibernating population of the endangered Indiana bat in the state of Tennessee. Of the eleven known species that reside in the park, at least six of them that hibernate in park caves and mines are susceptible to white-nose syndrome. (Photo by Adam Mann/Environmental Solutions and Innovations)

White-nose syndrome is a disease caused by the fungus Geomyces destructans and is responsible for the deaths of millions of bats in eastern North America. It is named for a white fungus that forms on the faces of many infected bats. While the actual cause of death due to WNS is unknown, the disease causes bats to become restless during hibernation, moving about the cave and burning up fat reserves or losing body water they need to survive the winter. There is no known cure for the disease.

Bats are important components of intact natural ecosystems and may provide services that benefit people, such as eating large amounts of insect pests. Great Smoky Mountains is home to eleven bat species and the largest hibernating population of the endangered Indiana bat in the state of Tennessee. Of the eleven known species that reside in the park, at least six of them that hibernate in park caves and mines are susceptible to WNS.

In 2009, all 16 park caves and two mining complexes were closed to any public entry to delay the importation of the WNS pathogen on visitor’s clothing or gear. Park caves will continue to remain closed to human access to minimize the chances of spreading the disease to other areas.

“While the confirmation of WNS in the park is not a surprise it is still a sad day for the resource,” said Dale Ditmanson, Park Superintendent. “By continuing to monitor bat populations in our caves and forests we hope to minimize WNS affecting other bat habitats outside of our boundaries”

Park visitors are reminded to not handle dead bats or bats found to be acting abnormally. According to the NPS Office of Public Health, WNS does not appear to pose a threat to human health since the fungus that causes WNS only grows at temperatures well below human body temperature. However, WNS can cause sick bats to exhibit unusual behavior, such as flying outdoors or at hibernaculum entrances at all times of day and in all types of weather, so bats may be encountered in unusual settings.

“While humans are not at risk of contracting WNS, bats are known to carry other diseases such as rabies. If you see a dead, sick or injured bat within the park, please notify the park at (865)-436-1230,” said Bill Stiver, NPS Wildlife Biologist. “Any dead, injured or sick bats found outside of the park should be reported to your local state wildlife agency.”