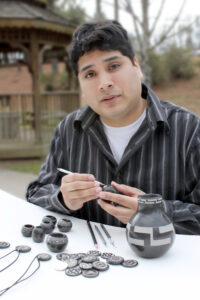 With the theme of “The Great Within the 58,” the ceremony will honor the top student from each of the state’s 58 community colleges.  Bark, who is from the Paintown community of Cherokee, graduated in December with his Associate in Fine Arts degree from OICA.

“OICA has given me the insight of how important the arts are to a culture,” said Bark. “One can determine how a society flourishes by the art it produces. Jeff Marley, the program coordinator, has done an outstanding job, along with the rest of the staff. I see OICA as a rare gem.  This school is history in the making, and I am so honored for the opportunity to be a part of it.”

Marley calls Bark “a model student…dedicated to the arts and very versatile in the mediums he uses.”

Bark will attend the statewide awards ceremony at the Raleigh Convention Center. A reception will be held at the Executive Mansion that morning, followed by an awards luncheon at noon.

An EBCI tribal member, Bark said he took classes at OICA “because I wanted to be a part of an exciting new school, which promotes Native American culture.”

Bark said OICA has given him and other students “the platform to showcase our talents…and it’s given me an insightful view of our culture and the importance it has placed in history.”

Since he was a kid Bark has been interested in art. When he was very young it was a form of escape for him. In his teenage years he discovered the possibility of selling his work. “Today I have a much deeper appreciation of art,” said Bark, whose preferred medium is graphite.

Most of his artistic ideas come from life experiences, focusing on inspiration from history, music, other artists and from emotions and the need to express them.

“SCC and OICA are outstanding institutions,” said Bark. “It is evident the instructors care for their students and the success of their students in their first priority.”

Bark looks forward to continuing his education this fall at Western Carolina University.

His ultimate goals in life are “to keep learning, to give back to my community, strive to be a vessel to my people and ultimately to become a cultural ambassador.”