CULLOWHEE – The Jackson County Public Library in Sylva will host “Reflections on Place: An Evening with Distinguished Storytellers” beginning at 7 p.m. Monday, March 26, as part of activities in celebration of the installation of David O. Belcher as the 11th chancellor of Western Carolina University. 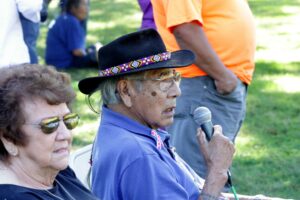 A reception in the library atrium will follow the free program. The public is invited to attend.

The reading will culminate a day of activities in Sylva and Dillsboro called “The Whee Hours” designed to bring members of the campus community into neighboring municipalities, including special deals offered all day March 26 by local merchants and restaurants to WCU students, faculty and staff who show their university identification cards.

Activities on the evening of March 26 will include the 5 p.m. unveiling of a new Dillsboro mobile application designed by students from WCU’s computer information systems program as part of an ongoing partnership between the university and Dillsboro officials and merchants.

The storyteller event at the public library will bring three notable literary figures from Western North Carolina together for a series of readings centered on the theme of “place.”

A native of Georgia, Byer attended Wesleyan College before going on to earn her master of fine arts degree from the University of North Carolina at Greensboro in 1968. She relocated to the North Carolina mountains around this time, serving as poet-in-residence at Western Carolina throughout the bulk of the 1990s and publishing several books of poetry. Throughout her career, she has received wide acclaim and honors, including a fellowship from the National Endowment for the Arts in 1988 and becoming, in 2005, the first female poet laureate of North Carolina, a post she held until 2010.

Born in the Sherrill Cove community that was later displaced by the development of the Blue Ridge Parkway, Wolfe is a respected elder of the Eastern Band of Cherokee Indians. He grew up listening to the stories of his parents, Owen and Lucyann Wolf, and today is a storyteller who recounts traditional Cherokee legends and stories about his experience growing up in Cherokee. A fluent Cherokee language speaker, he shares his experience of attending Cherokee boarding school and his knowledge of Cherokee stickball. He has served as an ambassador between the Cherokee people and other cultures for years.

Rash holds the John A. Parris Jr. and Dorothy Luxton Parris Distinguished Professorship in Appalachian Culture at Western Carolina, where he teaches creative writing and literature. A native of Boiling Springs, he is the author of nine books of fiction set in the Southern Appalachian Mountains (including the best-selling novel “Serena”) and four books of poetry. His latest novel, “The Cove,” is scheduled for publication in April. He has been inducted into the Fellowship of Southern Writers and is the recipient of numerous literary honors, including the international Frank O’Connor Short Story Award.

In addition to the evening event, the library also will be the scene of a special Children’s Story Time, as WCU’s new chancellor reads to local preschool children from 11 until 11:30 a.m. Tuesday, March 27.

Belcher will be installed as chancellor of Western Carolina during a ceremony capping a week of activities designed to highlight and celebrate the accomplishments of the university’s students, faculty, staff, alumni and community partners.

Thomas W. Ross, president of the University of North Carolina system, will preside at the installation ceremony, scheduled to begin at 10 a.m. Thursday, March 29, in the Liston B. Ramsey Regional Activity Center. The public is invited to attend.

The installation ceremony is the traditional academic ritual at which the chancellor takes the oath of office. The event is typically attended by UNC system officials, state legislators and other elected state and federal officials, academic delegates from other institutions across the nation and around the world, representatives of professional organizations and honor societies, and members of the campus and surrounding communities.

A 30-member steering committee is planning activities centered on the theme “Defining Our Future in Pursuit of Distinction.”

No state funds are being used for installation activities, which will be paid for through private and corporate contributions.

For information and a complete schedule of events, visit the website installation.wcu.edu.