Early on the morning of Tuesday, March 20, the Tribal Alcoholic Beverage Control Commission (TABCC) received its first shipment of alcohol from the state of North Carolina.  This might seem like an insignificant event, but it marks the first shipment the TABCC received as a permit-issuing alcohol control entity. 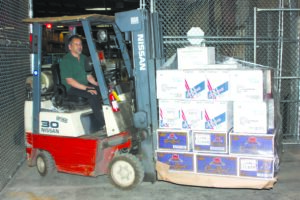 Abraham Queen unloads a shipment of alcohol to the TABCC from the state of North Carolina on the morning of Tuesday, March 20. (SCOTT MCKIE B.P./One Feather photos)

Prior to this shipment, the TABCC has received its alcohol from area distributors who received it from the state.  This move eliminates the middle man.

“This is a very historical event,” said Collette Coggins, TABCC chairperson.  “It’s the first time ever.”  She said they will receive weekly shipments from Raleigh.

Bob Blankenship, former TABCC chairperson, was present for the event and commented, “The Tribe will now get the markups and any taxes from the sales.”

He related that the TABCC is the only other entity, besides the state itself, which can issue alcohol permits in the State of North Carolina.

The same language above appears in a bill (NC Senate Bill 324) passed by the North Carolina General Assembly in June 2011.