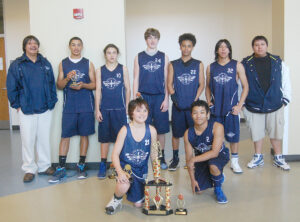 The Cherokee Flight then started the bracket play against the Vikings from Bristol, Tenn. and won 72-35.  That win had them playing the Carolina Phenoms in the semi-finals, and it was a well earned win for the Cherokee Flight as they won 75-64.

“The teamwork demonstrated by all players was exceptional,” said Coach Blaine Wolfe.  “We want to thank all of our parents and fans and look forward to another successful, winning season.  We also thank everyone who came out and supported our Indian Dinner fundraising efforts on Friday, March 9.  Everyone’s support is truly appreciated.”