The 26th Annual Frell Owl Award presentation was held at the Chestnut Tree Inn restaurant on Wednesday, Dec. 21.  Sandy Owle, longtime educator, was named the 2011 recipient and joined the prestigious list of winners of the award which is given to those whose service to Cherokee youth is exemplary. 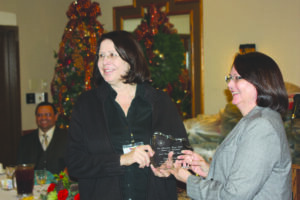 “I am honored to receive this award and be in a group of such prestigious individuals who have received it in the past,” said Owle.  “I sincerely appreciate everybody’s support.”

Denise Ballard, 2004 recipient, nominated Owle for the award, “Her career in working with kids is 36 years.  To work with kids and parents, you have to have a special passion.  It’s not just a paycheck.  Sandy is a good motivator.”

Ballard said winning the Frell Owl Award was a huge honor for her.  “To me, it was very special.”

She told of winning several national awards from the Boys & Girls Club of America during her time as director of the Cherokee Youth Center.  “That was a great honor, but when I came home and received the Frell Owl Award, that meant a lot to me.”

Lori Blankenship, Cherokee School Board member, commented on Owle, “Thank you for your work with our youth and helping to make things better for them.”

Wednesday’s event was opened with a prayer by Jack Davis.  That was followed by a performance by students from the New Kituwah Academy who sang several Christmas songs in the Cherokee language.

Tommy Lambert, Cherokee Boys Club general manager, then thanked the CBC Advisory Committee and the CBC Board of Directors.  He also recognized the past recipients of the Frell Owl Award who were present.

“Thank you for your dedicated service not only to our community, our Tribe and our school, but to all of western North Carolina,” Blankenship said of the Board of Directors.