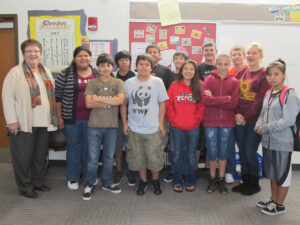 Chief Dugan asked the students what community they represent and emphasized the importance of knowing where you come from in Cherokee.  “Families are what has held the Tribe together through adversity and each community is your family and families bind communities,” she told the students.

The students asked Chief Dugan about her term as Chief.  “The Tribe was in shambles, needing improvement in management.  I set up divisions in the Tribe and appointed seven people to represent each division to help meet the needs of the people.”

“The most significant preservation of Cherokee culture was the purchase of Ferguson Field, Kituwah,” she told the students.  “Tribal Council agreed to buy Kituwah and get it back in the hands of the Cherokee people.  When the Western Band attended the dedication, they wept.  It represents where all of us come from.  If there’s anything I want to be remembered for, it’s the purchase of Kituwah.  It’s the most significant piece of land we own.”

Chief Dugan was asked by a student, “Which is more demanding, Chief or Superintendent?”

She quickly answered, “The Chief’s job is so demanding – it’s twenty four hours a day.  When you make decisions, you please one group and displease another group.    And being the first woman elected for Eastern Band, I worried about things all night and everywhere I went people stopped me; it was challenging.  But as Chief, you get to serve the people and the Tribe.  As Superintendent, I get to impact the young people, the most important because you will be running the Tribe one day.”

She was then asked, “Is there anything you wish you would have done differently as Chief?”

Chief Dugan answered, “I would have taken more time to do things.  When I was Chief, I felt like I didn’t have enough time to make some changes.  I think those changes were too quick and I feel like that’s the reason I wasn’t re-elected.  But for the first time in one hundred years the Tribe was becoming more independent but the people worried about those changes.  For instance, if the Tribe couldn’t pay the debt would the government take our land?  We made it and I think people are still scared that the Tribe can’t pay the debt and things will get taken away.  It’s hard for people to accept change, but we will make it.  Being Chief isn’t easy.  You can’t imagine what it’s like to be Chief until you’re in that office.  There are so many needs that have to be met and you’re the one responsible.”

The students were especially interested in Chief Dugan’s education.  “I attended school in Cherokee through the seventh grade.  My preacher’s wife asked my mother if she would like to send me to a Methodist school for girls.  My mother knew there wasn’t much opportunity for me in Cherokee at the time.  When it was time for me to begin the eighth grade she hired someone to drive us to my school.   She later told me if I had just said I didn’t want to go, she would have brought me back home.  I was most homesick during the Fair but I got to come home for Christmas and the summer.  My mother really sacrificed and she did the right thing.  She worked all year and through the summer, saved her money just to buy nice clothes for me to wear at school; not that it was required but she wanted me to have them.  There were no prejudices there; the school was small and safe.  Eight of us graduated my senior year, we were like sisters.   It was the turning point in my life and that school provided the education I needed to improve my life.”

One of the students asked Chief Dugan if the teachers were ever mean to her.  “No, they were strict and harsh but not mean.  They didn’t hit or mistreat us.  We had a merit and demerit system.  So we were rewarded but if we received too many demerits, we could get expelled which was a dishonor and we wanted to stay in school.”

She continued with the students, “When teachers are strict with you, they see potential in you.  And in Cherokee, there is so much opportunity.  We have everything we need.  Believe in yourself, you can make a difference.”  One of the students replied, “You’ve makes us realize how lucky we are with this school and all these books; we have everything.”