Friends of the Smokies donates 20 acres to Park

GATLINBURG – Great Smoky Mountains National Park got an early Holiday gift on Wednesday, Dec. 14, when the Friends of the Smokies officially transferred 20 acres of new land to be added to the Park.  The land lies along Soak Ash Creek in the Pittman Center, Tenn. community just east of Gatlinburg.  Friends purchased the tract at auction in the summer of 2010 at a cost of $775,500. 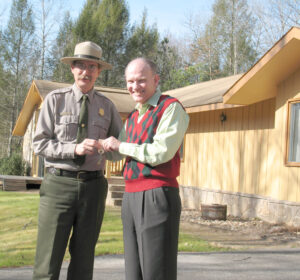 According to Smokies Superintendent, Dale A. Ditmanson, “We had been interested in acquiring that property for many years if it ever came on the market, because it is surrounded by Park land on three sides, and is ripe for development.  We are very happy to be able to prevent potentially intensive development right on the Park’s boundary and it also protects an intact wetland.  Along with the property we inherited a sprawling 5-bedroom home which we plan to make available for occupancy by the Appalachian Trail Conservancy (ATC). The house also includes a large conference space which may occasionally host Park field trips by the Eugene W. Huskey Environmental Center when foul weather forces them indoors.”

“We are so pleased to be able to help protect the Smokies through the addition of this key parcel. Friends President Jim Hart said. “We also are grateful to our Pittman Center neighbor and Friends Board member Jim Ogle whose annual “Picnics in Pittman for the Park” at his Emerts Cove home have raised over $500,000 which became the core of the purchase price.  Other significant support included a $25,000 grant from the Foothills Land Conservancy.

Although the Friends have owned the property since last summer, the Park needed to complete a number of surveys of the structure and the land before accepting ownership of the tract. The Park is finalizing plans to lease the house to the ATC which will utilize the residence as a field office, as a training space, and as housing for the Appalachian Trail Ridgerunners when they are off the trail and for use by ATC Trail Crews, which the Park brings in most years to take on major AT reconstruction projects.

In past years the ATC crews have been assigned to a 4-bedroom log dormitory directly behind Park Headquarters which, ironically, was also donated to the Park by the Friends in 1995.  Park officials plan to re-purpose the log dormitory for use as the Park Communication/Dispatch Center.  Currently dispatchers and their growing collection of computer equipment and incident files are crammed into two small offices in the Headquarters basement.

Ditmanson concluded, “This recent donation – when coupled with the reuse of the earlier log cabin gift,  is just one more reminder of just how integrated the Friends have become into the Park’s protection and infrastructure management.”