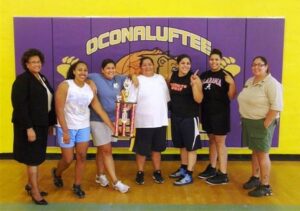 It was a day filled with sportsmanship, excitement, community, and high flying basketball games. As a special part of the basketball tournament, the Oconaluftee Recreation Department also hosted a ‘Hot Shot’ shoot out.  One player from each team shot in this fierce competition requiring players to face off against each other while showcasing their individual talents. Overall the two players with the most points went into a ‘sudden death’ round filled with lots of 3-point and difficult long range shots.  The overall winner in this special competition, Brandon Bark, represented the Jason Saunooke Team of Cherokee. The ‘Hot Shot’ runner-up was Davion Smith, a Carpentry student at Oconaluftee JCCCC. The overall winner of the tournament was the Travis Climbingbear Team of Cherokee.  Winning team members included Kyle Lossiah, AJ Welch, Storm Sequoyah, John “Rooster” Crowe, Mike Welch, Jack Smith, and Travis Climbingbear.

On the same weekend, Oconaluftee JCCCC hosted its Second Annual Fall Volleyball Tournament with six teams participating from three states.  An invitation was extended to the Schenck, LBJ, Jacobs Creek, and Atlanta Job Corps Centers as well as the Velva Powell Team of Cherokee.  The level of competition was high as teams traded hard to hit serves and spikes.

Oconaluftee’s Recreation Specialist, Alta Johnson, noted that there was great sportsmanship as well. “I saw teams supporting each other, working together, and laughing in good fun. We would like to thank all the players, teams, and coaches for their participation. This is community in action”.

The winner of this year’s tournament for the second year in a row was the Velva Powell Team including: Velva Powell, Krystle Bolden, Qiana Powell, Tahnee Arkansas and Brianna Lambert.

Oconaluftee’s own Lady Bears Volleyball Team placed second overall in this tournament.  “We are very proud of our students for their hard work both on and off the court” said Oconaluftee Center Director, M.E. Smith. “Our community and fellow Job Corps Centers are important to our continued success and we appreciate their support in these tournaments”.

The Oconaluftee Job Corps Civilian Conservation Center is associated with the National Forests of North Carolina. It is accredited by the Council On Occupational Education and currently serves 104 students.  The mission of the USDA Forest Service is to sustain the health, diversity, and productivity of the Nation’s forests and grasslands to meet the needs of present and future generations.  The Agency manages 193 million acres of public land, provides assistance to State and private landowners, and maintains the largest forestry research organization in the world. For more information about the Oconaluftee JCCCC, visit oconaluftee.jobcorps.gov.

Holly is the liaison specialist and work-based learning coordinator at OJCCCC.