The Cherokee Runners have been very busy in November and the first half of December with a variety of races.  Runners have competed in the 5K at 11PM at Western Carolina University on Nov. 11, the inaugural Light the Way Dollywood 5K, the Big Cove 5K that was organized by Tara McCoy, the Turkey Trot 5K, the Atlanta Half Marathon, the Jingle Bell 5K, the Double Pump (9.3 mile) Bridge Run in Savannah and the Santa Hustle 5K, among others.  Cherokee Runners brought home medals in many of the competitions and represented the Tribe well. 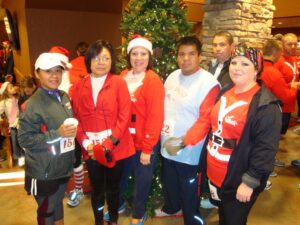 In addition to competing in local and distant races, Stephan and Robin Swimmer attended coaches training in Myrtle Beach along with Eddie Swimmer, coach for the Cherokee Cross Country girl’s team.

The group also welcomed new members and is in the process of inviting others to join.  The 1,000 mile designation has now been awarded to Chad Bowman, Robin Swimmer, Jimmy Oocumma, Gerri Grady, Brian Driver, Sean Grady and Elnora Thompson.  Once a runner has completed 1,000 miles, he or she is given a jacket with the groups’ logo and their name embroidered on it.  The next milestone for members is 5,000 miles.

Runners will begin soon training for the Smoky Mountain Relay, a 207.5-mile race from Brevard to Nantahala Outdoor Center that will be held in April.  Also upcoming is the New Year’s Day 5K in Cullowhee on Sunday, Jan. 1, 2012.

Cherokee Runners invites everyone, no matter their fitness level, to join.  Walkers are welcome!  The regular meetings are held on the 1st and 15th of each month at 7pm in the Age Link Conference Room.