There are 122 Job Corps Centers in the United States.  One of the best in the country is located minutes outside of Cherokee. 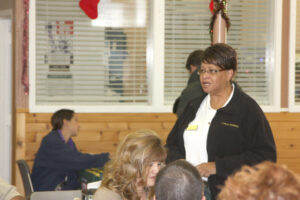 Mary Smith , OJCCCC director, welcomes everyone to a meeting of the Community and Industry Relations Council at the Oconaluftee Job Corps Center on Thursday, Dec. 8. (SCOTT MCKIE B.P./One Feather photos)

The Oconaluftee Job Corps Civilian Conservation Center (OJCCCC) ranked third nationally in GEDs earned, third in Numeracy testing, and fifth in Literacy testing out of all Centers in 2011.  Since June, the Center’s students have earned 22 GEDs.

“I’m very proud of our students and teachers,” Mary E. Smith, OJCCCC director, said at a meeting of the OJCCCC Community and Industry Relations Council held at the Center on Thursday, Dec. 8.  “We could not do this without your assistance.”

The work-based learning program at OJCCCC was the focus of Thursday’s meeting.

Holly Krake, the Center’s business/community liaison for the work-based learning program, related that students logged over 13,000 hours since January with over 20 community partners in a nine-county area.  “The education that a student comes here to get is the best in the country as far as Job Corps is concerned,” she said relating that students donated over $195,000 in labor in 2011. 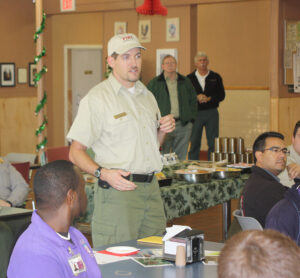 Brendon Goss is a student at OJCCCC and spoke of his experiences at the Center during Thursday’s meeting.  “As a student coming to Job Corps, I really do think this is a great program.  Once I came out here, I just fell in love with the place and the staff – they do a great job.”

Goss has earned his GED and driver’s license during his time at the Center.

During the meeting, Matthew Pegg, Cherokee Chamber of Commerce executive director, was elected the new president of the Community and Industry Relations Council.

“We actually work a lot with the Job Corps for our local fishing tournaments,” he said.  “Without them, we’d fall flat on our face.  They are great to work with.  These guys really do a nice job.”

Some of the goals discussed for OJCCCC in 2012 included increasing the amount of volunteer work hours by students in the work-based learning program, increasing the number of partners to 30 and adding a new HVAC training program.