Benjamin Alex Clark, 49, passed away Sunday morning, October 30, 2011 at Charles George VA Medical Center in Asheville. A native of New Martinsville, WV, he was the son of the late Lowell Clark and the late Verda Smith. He was a veteran of the U.S. Army, U. S. Navy,  and worked with the Jackson County Sheriff’s Department as a detention officer. 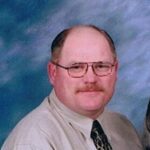 He was an avid firearms collector and a Mason. He was a member of Shoal Creek Baptist Church and a beloved husband, father, and friend. Besides his parents, he was also preceded in death by two brothers, Michael Bishop and Steve Goddard.  He is survived by his wife of 15 years, Traci Henderson Clark, a daughter, Katlyn Brahmer of Whittier, a son, Michael Clark of West Virginia, one brother, Anthony  Clark of Phoenix, AZ, and an uncle, James Trader.

A celebration of Benjamin’s life will be held at 2pm Friday, Nov. 4, 2011 in the Chapel of Appalachian Funeral Services in Sylva. The family will receive friends an hour before the service at the funeral home. Burial with military rites will be in the Thomas Memorial Cemetery in shoal Creek, Whittier, NC.  In lieu of flowers, memorials may be made by donations to www.cellphonesforsoldiers.com.  The donations will go to providing prepaid calling cards for soldiers serving overseas. An online registry is available at www.appalachianfuneralservices.com