The Cherokee Chamber of Commerce, in association with the EBCI Fish and Wildlife Department and assistance from the North Carolina Fly Fishing Team, hosted the 2011 Rumble in the Rhododendron fly-fishing tournament.  This two-person team event showcased the special catch and release, fly-fishing only section of the Oconaluftee River on the Cherokee Indian Reservation.  The tournament ran Oct. 21-23 with $10,000 in prize money being awarded between first, second and third place. 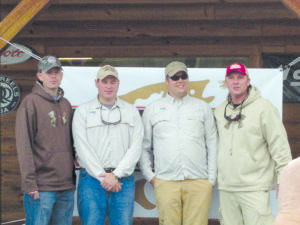 Shown (left-right) are Matthew Pegg, director of the Cherokee Chamber of Commerce and tournament organizer; the winning team of Chris Lee, of Bryson City, and Paul Bourcq, of Franklin; and Curtis Fleming, executive producer and host of the television show “The Fly Rod Chronicles with Curtis Fleming”. (Photo courtesy of Cherokee Chamber of Commerce)

Competitors from North Carolina and Georgia made up the majority of the entrants into this year’s event, but participants from as far away as Pennsylvania and Colorado rounded out the field, which had 26 teams.  First place in the tournament went to Paul Bourcq of Franklin and Chris Lee of Bryson City.

Tournament organizer and executive director of the Cherokee Chamber of Commerce Matthew Pegg gets excited when he talks about the tournament. “The Rumble in the Rhododendron is a great weekend of competitive fly-fishing on a portion of the best trout water East of the Mississippi River.  With that said, competitors, volunteers and spectators all share a weekend in the mountains during the peak of our fall color season, so the backdrop to the tournament was just fantastic.”

Chris Lee, of the winning team was well prepared for the tournament and said, “This was a great competition with competitors coming in from all across the United States. They had the opportunity to experience some of the best fishing in the Smoky Mountains.  My team was lucky to come out on top”

Anglers of all ages and skill levels are welcome to fish in Cherokee.  The trout fishing season in Cherokee is open year round and a daily Cherokee fishing license is required.

For more information on the Rumble in the Rhododendron visit www.fishcherokkee.com or call the Cherokee Chamber of Commerce at 828-497-6700.