Cherokee Preservation Foundation has announced that Juanita Wilson has been hired as Program Manager for The Right Path, a culture-based leadership development program for adult members of the Eastern Band of Cherokee Indians. 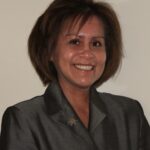 The Right Path, which just finished its inaugural year, works to bridge the past and present by examining traditional cultural elements as well as contemporary leadership competencies.  The purpose of adult and youth leadership programs developed by Cherokee Preservation Foundation and members of the community is to introduce the concept of selfless leadership and encourage emerging leaders to draw on Cherokee traditions in their decision making process.

“The Right Path is helping the EBCI produce leaders who will be guided by their cultural roots, which I believe is a critical characteristic that must be nurtured,” said Wilson, who is the first Program Manager of The Right Path and served as a consultant in the pilot phase of the program.

Previously, Wilson was employed as Site Director for the “Today, Not Tomorrow” alcohol prevention program in the Cherokee Central and Swain County schools, Deputy Administrative Officer for the EBCI and a Program Director for Cherokee Preservation Foundation.

Wilson earned a Master of Science in Management and Leadership at Montreat College and a Bachelor of Science in Sociology at Western Carolina University.

She has been chair of the Oconaluftee Institute for Cultural Arts Advisory Board since 2005, and chaired the Board of Director of the Region A Partnership for Children from 2008 to 2011.  She is also a member of the Cherokee Healing & Wellness Coalition.