A Candlelight Vigil was held Thursday, Oct. 14 at the Cherokee Indian Fairgrounds in honor of all victims of domestic violence. (SCOTT MCKIE B.P./One Feather photos)

“I’m afraid that 20 years from now somebody like me is going to be standing here talking about the exact same thing,” said Tom Hill of the EBCI’s Analenisgi program.  “We have got to make a change.”

Statistics provided during the program state that there were 107 domestic-violence related homicides in North Carolina in 2010 (70 female victims, 37 male).  And, from January 2010 to January 2011, Cherokee had 125 protective orders, 75 warrants and three murders related to domestic violence.

“This is a man on women crime,” Hill said.  “If men quit abusing today, there will be an 80 percent drop in domestic violence.  Men have to take responsibility for this.” 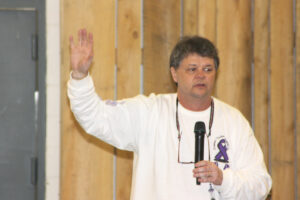 Tom Hill, of the Analenisgi program, talks to the crowd.

He asked the crowd if anyone knew of the term “Indian love” that is used throughout Indian Country.  A few raised their hands.

“I want to take that phrase back!”

Painttown Rep. Terri Henry reported that she just returned from the NCAI Impact Week where she briefed a committee on re-instating and re-funding the Violence Against Women Act (VAWA), originally enacted in 1994.

“What we need to do is continue keeping women safe,” she said, “and the way we do this is through the law.”

She said one of the major hurdles has been a lack of criminal jurisdiction over non-Indians.   Proposed amendments could remedy that situation. 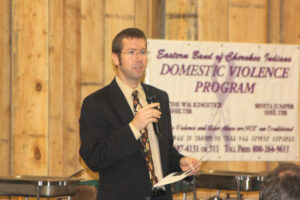 “That is a tremendous victory for us if we can get the legislation passed because then we can prosecute anyone who comes on this land and perpetrates against Indian women.”

Rep. Henry said that Tribes do have civil jurisdiction over non-Indians for protective orders currently.  “The work continues.”

She praised the work of the EBCI DV/SA program.  “I think that this event has been a real thoughtful and key element for this program.”

Jason Smith, EBCI tribal prosecutor, spoke about the impact of the Tribal Law and Order Act which was enacted in July 2010.  “Overall, the biggest accomplishment of this Act, I believe, is to increase sovereignty, to increase cooperation within Indian Country and to increase reporting.”

He told the crowd how the Act triples the amount of jail time a tribal court can impose on a person convicted of a crime from a maximum of one year per count to three years per count and nine years per case.

In dealing with domestic violence offenders, Smith said the goal is always rehabilitation.  “It doesn’t always work.  We need to have stiffer penalties for habitual offenders.  This new Act does that.”

Steven Whitehorn, of the Analenisgi program, said the cycles of abuse must end.  “Over 90 percent of the children we work with have been exposed to domestic violence in some form.  That is unacceptable in our Native American communities and its time we did something about it.”

“We take very seriously violence against women and how we want to take a stand to end it.”

Visit the One Feather photo galleries for more images from this event: