The Braves almost doubled the net yards of Rabun Gap (Ga.) and the scoreboard reflected it as Cherokee won their homecoming game 36-16 on Friday, Sept. 30. 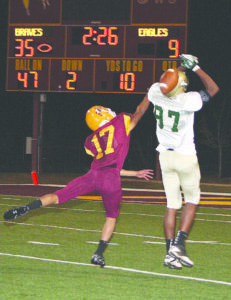 The passing game was on as well as QB Ray Smith completed 7 of 11 passes for 95 yards and a score.   TE Greg Tisho led the receiving corps with five catches for 72 yards.

Cherokee now has a kicking game to speak of.  Derrick Ledford has been working overtime in practice and it paid off Friday night as he went 5 for 5 on extra points.

Rabun Gap turned the ball over three times (two fumbles, 1 INT) and Cherokee lost two fumbles.  The Braves were penalty-happy though with 11 for 91 yards.

The Braves got things going in the first quarter as Smith hit Poncho Ramirez on a 38-yard touchdown pass.  Derrick Ledford added the extra point and Cherokee led 7-0 midway through the quarter.

A host of Braves defenders stop a Rabun Gap runner.

Two minutes later, Queen ran 63 yards for his score.  Ledford added the extra point and Cherokee extended its lead to 14-0 at the end of the first.

The Braves added three more scores in the second quarter.  Johnson scored twice on runs of 3 yards and 13 yards and Tisho recovered a Rabun Gap fumbled and returned it 86 yards for a touchdown.  Ledford added all three extra points and Cherokee took a 35-0 lead into the locker room.

Now, it was Rabun Gap’s turn.

Late in the third quarter Morgan Souder kicked a 29-yard field goal to put them on the board 35-3.

A few minutes into the fourth quarter, Perez Knowles ran for a 31-yard score.  The extra point kick was no good and Cherokee led 35-9 with nine minutes left in the game.

Then, with just two minutes left, Knowles ran 29 yards for his second score of the game.  Jake Gajda added the extra point to make it 35-16 which is how the game would end.

Tisho led the way for the Braves with 13 tackles followed by Forrest Stamper with 11 and Gabe McMillan with seven.  Tisho also recovered two fumbles including the one he took back to the house in the second quarter.

BRAVES PLAYERS OF THE GAME:  Caleb Queen and Jeremy Saunooke