Painttown Rep. takes Oath of Office separately from other Reps

Eleven of the twelve Tribal Council Representatives took their oath of office during the EBCI Inauguration on Monday, Oct. 3 at Harrah’s Cherokee Casino & Hotel.  One took her oath of office, but in a different place. 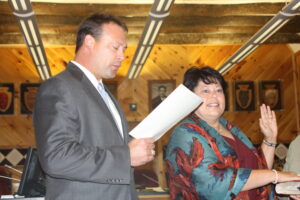 Painttown Rep. Terri Henry, starting her second term in Council, disagreed with the Inauguration on several fronts.  She decided, instead, to take her oath of office at the Tribal Council House on Monday prior to the official Inauguration held at the casino.

Congressman Heath Shuler (D-NC), who happened to be passing through the Council House on Monday morning, was asked by Rep. Henry to administer the oath of office.  He agreed, and she took the actual oath of office in front of around 30 people in the Council Chambers.

“I believe that the backdrop of where our government is sworn in is just as important as the swearing-in itself,” she said.  “And, as a government official and a person who was elected by the people, I feel like it is important that we do this in our public places that are supported by our government.”

Rep. Henry went on to say, “The second reason is that the Chief had issued a cost containment memo.  I’m not exactly sure what the costs were of having that (Inauguration) at the Casino, but I felt like, as a steward of the public trust, I believe that if the Executive has taken the steps to put cost containments on the Tribe, then we should follow that.”

She said she realizes there is reason to celebrate an Inauguration, “But, I also believe that the cost containments are there.  There are reasons for that to have happened, and we should be proper stewards.”

“The other thing is that I had people tell me that they weren’t going to go to the casino because whether they go to church or they have the same concerns that I do.”