“Join us today for a day of joy, thanksgiving and pride,” said Brandon Stephens as he opened the 2011 Inauguration of the leaders of the Eastern Band of Cherokee Indians.  The event, held in the Council Fire Ballroom at Harrah’s Cherokee Casino & Hotel on Monday, Oct. 3, included the swearing-in ceremonies for the offices of Principal Chief, Vice Chief, Tribal Council and three Cherokee School Board members. 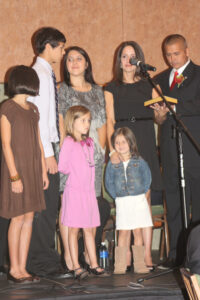 Principal Chief Michell Hicks (right) stands with First Lady Marsha Hicks and their children as he is sworn in for his third consecutive term as Principal Chief. (SCOTT MCKIE B.P./One Feather photos)

Three members of the Cherokee School Board were sworn in at the Inauguration including:  Painttown – Charlotte Saunooke, Big Y/Wolftown – John Dick Crowe and Yellowhill – T.W. (Price) Saunooke.

Prior to giving his inaugural address, Chief Hicks thanked his wife Marsha.  “She’s my backbone.  I want to thank her for her support.”

He also thanked his children, “I love you guys and I love our Tribe.” 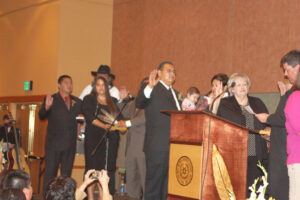 He said he dreams of a day when Cherokee people will not be divided by tribal lines or political factions.  “As you’re sitting here today or travel home to your families, I ask you to carry one question with you – one essential consideration; does true Cherokee blood run through your veins?” 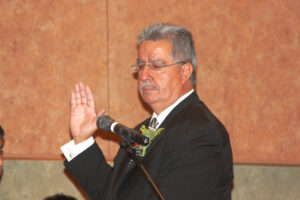 Chief Hicks went on to say, “The promise we seek of unity and prosperity requires more of us than an official title or government-issued ID card.  It requires binding blood of Cherokee courage; the blood that courses through our veins and enables us to act when we’re called.”

He stressed the importance of working together for the future of the entire Tribe.  “We are a new generation of Cherokees with a resounding voice.”

Vice Chief Blythe thanked his family and the members of the Tribe and said he wants to concentrate on several issues in the next term including housing, employment opportunities and education.

To thunderous applause from the audience, Vice Chief Blythe did send a message to Gov. Beverly Perdue during his remarks.  “She needs to sign our compact agreement.”

He went on to thank his church and told of his recent Baptismal.  “I want to thank my God.”

“I consider every single one of you in this room my friend,” said Vice Chief Blythe, “And, it’s a pleasure to work for you and work with you.”

The Steve Youngdeer American Legion Post 143 Color Guard presented the colors at the opening and closing of the inauguration.  Musical selections were offered during the program by Jacob Sneed who sang “Amazing Grace” in English and the Cherokee language and Dale and Stephanie Scragg who performed “God of this City”.   Noah Crowe offered the closing prayer.

Visit the One Feather photo galleries to see more images from this event: