The Eastern Band of Cherokee Indians is set to kick off the 99th Cherokee Indian Fair with a parade on Tuesday, Oct. 4.  With the theme, “Cherokee Matriarchs: The Strength of Our Nation”, the Fair will continue through Saturday, Oct. 8. 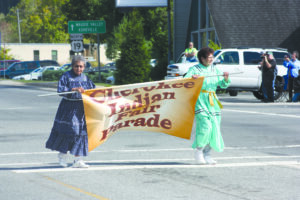 Prior to the parade, the festivities will kick off with the 2nd Annual Chief’s Challenge mile-run race through the streets of Cherokee.  Registration will be held for the race from 12 – 2:30pm at the Cherokee Bear Zoo and the race will start at 3pm.  Registration is $10/adults and $5 for children 12 and under.  For information on the Chief’s Challenge, call Tara McCoy 497-1976 or Phyll Reed 497-1971.

Due to the race and the parade, White Water Road will be closed on Tuesday, Oct. 4 from 2pm until the end of the parade.

Christopher Watty, an EBCI tribal member, has been named the master of ceremonies for this year’s fair.

“He (Christopher) has hosted events in Cherokee for several years,” said Robert Jumper, EBCI Travel & Tourism acting director, “and we are pleased to have him as our master of ceremonies for the Fair this year.”

General admission daily is $10 and children six and under are free.  EBCI tribal members get free admission.  Bring your enrollment card to the Fairgrounds to receive a ticket for the fair.  According to Travel & Tourism officials, an official EBCI enrollment card is the only accepted verification to get the free ticket.  Children under six are not required to have proof of enrollment.