When your team averages 10.3 yards a play on offense you’re probably going to win the game.  That’s exactly what happened on Friday, Sept. 23 as the Murphy Bulldogs (3-3) beat the Braves 35-14.  Murphy gained 393 net yards on offense as Seth Curtis ran for two touchdowns and passed for two more for the Bulldogs. 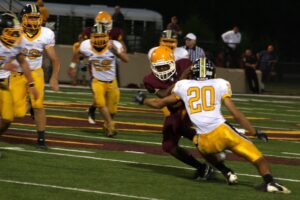 Cherokee's Caleb Queen tries to fake out a Murphy defender as a host of Bulldogs are in pursuit. (DENISE WALKINGSTICK/One Feather contributor)

Curtis gained 129 yards on eight carries scoring twice.  On the passing side, he completed 6 of 12 for 159 yards and two touchdowns.  The Bulldogs gained 234 yards on the ground.

The Braves, who have had problems with turnovers all season, only turned the ball over once on an interception.  Murphy lost two fumbles on the night.  The Braves did hold onto the ball better in this contest, but penalties still plagued them as they were flagged 10 times for 79 yards.

The game itself started with a neat extra.  Across the country, it was Reagan Centennial National Football Coin-Toss night so a coin commemorating the centennial year of the late former President Ronald Reagan’s birth was used for the opening coin toss.

The first quarter started out with a bang as Curtis hit Brice McKeon on a 54-yard touchdown pass not even a minute into the game.  Chris Tarnowski’s kick was good and Murphy led 7-0 at the 11:12 mark.

Seven minutes later, Curtis would throw his second touchdown pass of the quarter as he connected with Josh Cook on a 59-yard score.  Tarnowski added the extra point and the Bulldogs extended their first quarter lead to 14-0.

Cherokee would not lay down though as Smith lit it up with a 70-yard touchdown pass to TE Greg Tisho.  Derrick Ledford added the point after and the Braves cut into the lead 14-7.

Midway  through the second quarter, Murphy’s Brice McKeon ran a punt back 70 yards for a Bulldog touchdown.  Tarnowski added the point after and Murphy took a 21-7 lead into the locker room.

There was no scoring in the third quarter.

Curtis put the game away in the fourth though on touchdown runs of 56 and 15 yards.  Tarnowski made both point after kicks and Murphy led 35-7.

Never quitting, the Braves kept going until the end and Smith hit Poncho Ramirez on a 14-yard score with eight ticks left in the game.  Tommy Lossiah made the point after and the game ended with the Bulldogs on top 35-14.

Tisho led Cherokee with 15 tackles followed by Jeremy Wolfe and Cory Johnson, who was named Player of the Week by the CHS coaching staff, with six each.

This week, the Braves (2-4) play host to the Rabun Gap (Ga.) Eagles (1-4).  The Eagles are coming off their first win of the season as they beat the Anderson (SC) Cavaliers 22-15.  Hayesville, the common opponent for Cherokee and Rabun Gap, beat the Eagles 40-14.