A new agreement between the Eastern Band of Cherokee Indians and the U.S. Attorney’s Office for the Western District of North Carolina will allow fewer criminal cases to slip through the cracks. Tribal Prosecutor Jason Smith was cross-deputized as a result of the agreement, signed Friday, Sept. 23, and will now be able to prosecute some cases occurring on tribal lands in federal court. 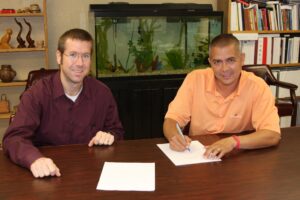 Tribal Prosecutor Jason Smith and Principal Chief Michell Hicks sign an agreement on Friday, Sept. 23 with the U.S. Attorney's Office for the Western District of North Carolina whereby Smith will be able to prosecute some cases in federal court. (LYNNE HARLAN/EBCI Public Relations)

“I am truly excited about the opportunity to work more closely with the U.S. Attorney’s Office for the Western District of North Carolina in this capacity,” Smith said.  “I sincerely appreciate Principal Chief Michell Hicks as well as the Vice Chief and Tribal Council for their work and support to help accomplish this achievement.  I also thank U.S. Attorney Anne Tompkins for providing this opportunity.  I believe that this agreement will help our offices to become even more successful in the prosecution of criminal cases occurring on the Qualla Boundary.”

Until this agreement, tribal prosecutors, like Smith, have only been able to prosecute cases in Tribal Court which has a sentencing restriction of three years per criminal count.

“This agreement will allow me to prosecute in federal court any cases assigned to me by the U.S. Attorney,” Smith noted.  “This could include any type of criminal case occurring on the Qualla Boundary with federal jurisdiction (i.e. major crimes under the Major Crimes Act – 18 USC 1153, reservation crimes – 18 USC 1152, or any other federal crime such as drugs, firearms, bank robbery, etc.).”

Principal Chief Michell Hicks commented, “This MOA is a really big step for the Eastern Band of Cherokee Indians.  We’ve done our best to maintain a good relationship with United States Attorney’s office, and this is only one of the positive things that has come out of that relationship.  This MOA gives the Eastern Band an opportunity to address some cases that have been picked up before.  This makes us stronger as a Tribe and strengthens our ability to care for our enrolled members.  I have a lot of confidence in Jason and am excited to see what we can do with this opportunity.”

U.S. Attorney Anne M. Tompkins commented, “The U.S. Attorney’s Office is excited to finalize its agreement with the ECBI Tribal Prosecutor.  We have always had good communication, but having Jason Smith cross-deputized strengthens our ability to determine those cases best handled in federal court.  Through this partnership, we can minimize delays and work closely to keep communities safe and we thank Principal Chief Hicks and Mr. Smith for making this possible.”

Those numbers are stark increases from the 2009 report for Cherokee which lists 34 violent crimes including one murder, eight forcible rapes, three robberies and 22 aggravated assaults.  The 2009 report listed 197 property crimes.

One of the major components of the Tribal Law & Order Act, enacted last year, was the cross-deputization of tribal law enforcement officers and prosecutors.

“Based on past experiences, there is every reason to believe that encouraging U.S. Attorney’s Offices and the BIA to provide expanded federal deputation training and commissioning, in full partnership with the Indian nations they serve, can increase law enforcement cooperation, strengthen prosecution, and save lives,” Troy A. Eid, Indian Law & Order Commission, testified at the hearing.