Braves win “Battle of the Nations” 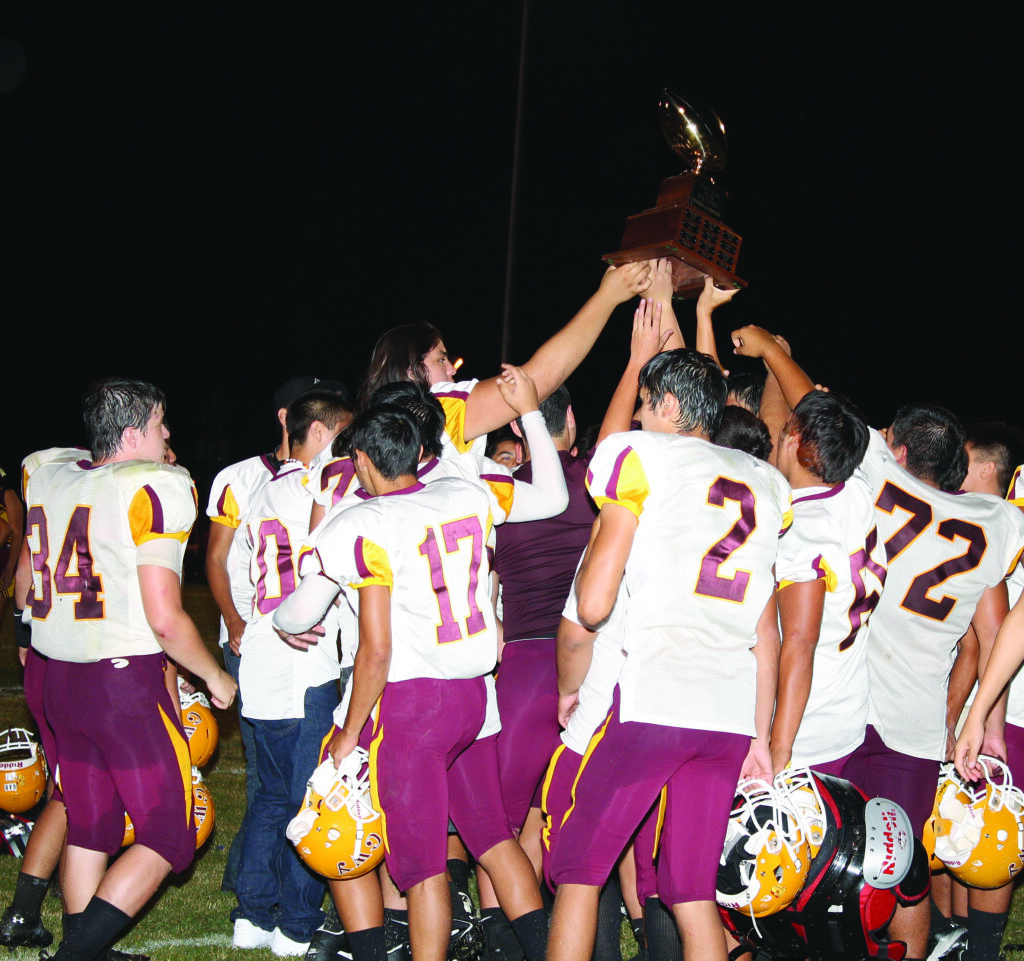 Cherokee defeated Choctaw 26-20 to take a 9-6 lead all-time in the annual game that began with a friendly rivalry between former Principal Chief Ed Taylor and the late Phillip Martin, long-time Principal Chief of the Mississippi Band of Choctaw Indians. 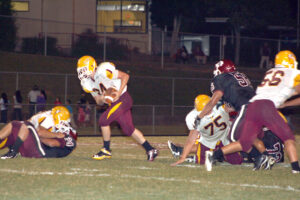 Braves linemen open up a hole "large enough to drive a truck through" for RB Corbin Wright during Friday's game.

Corbin Wright led the way for the Braves with 115 yards on 15 carries.  He was followed by Caleb Queen who gained 78 yards on 10 carries and 1 TD.

Each team had five turnovers in the game with Cherokee losing four fumbles and throwing one interception and Choctaw losing two fumbles with three INTs.  Both teams were riddled with penalties.  Cherokee had 14 for 131 yards and Choctaw had 13 for 96 yards.

The Warriors struck first in the game as Alex Lacey scored on an 18-yard run with 4:52 left in the first quarter.  Lacey gained 55 yards on 12 carries for the game.

The Braves answered with 32 ticks left in the quarter as Seth Littlejohn ran for a 25-yard score.  The kick by Derrick Ledford was good and the game was tied at 7-7 at the end of the first quarter. 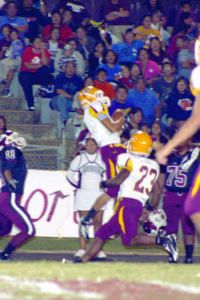 Jeremy Wolfe goes up and grabs one of his two interceptions on the night.

Cherokee took the lead a few minutes later as Queen ran for a 16-yard touchdown.  Ledford’s kick was good and the Braves led 14-7 with 7:10 left in the half.

Cherokee would add one more score before halftime as Ray Smith hit Queen on a 38-yard touchdown pass.   Ledford’s kick was blocked and the Braves took a 20-7 lead into the locker room.

The Warriors scored early in the third quarter as Demarquis Wilson ran for a 10-yard score.  The extra point was no good and Cherokee led 20-13.

Early in the fourth quarter, Smith would hit Greg Tisho on a 59-yard touchdown strike to extend the lead and essentially seal the deal.  Ledford’s kick was blocked and Cherokee led 26-13 with 11:47 left in the game.

Choctaw would get on the board one more time as Wilson threw a 17-yard touchdown pass with just over six minutes left, but it was not enough as the Braves would hold on for the 26-20 victory.

This Friday, Sept. 16, the Braves travel to Hayesville to take on the 3-1 Yellowjackets who are coming off a 40-14 win against Rabun Gap (Ga.).  Hayesville beat Towns County (Ga.), the one common opponent between them and Cherokee, 21-6 while the Braves beat them 38-0.  The Friday kickoff is scheduled for 7:30pm.