VONORE, Tenn. – The Fort Loudoun State Historic Park and the Sequoyah Birthplace Museum are partnering for the Great Island Festival, slated for September 10-11, from 10:00 a.m. until 5:00 p.m. each day. 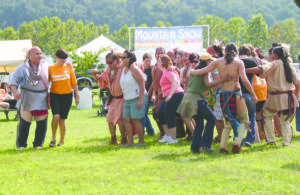 The Warriors of Anikituwah lead a dance at a previous Great Island Festival held at the Sequoyah Birthplace Museum near Vonore, Tenn. (DAWN ARNEACH/One Feather contributor)

The Great Island Festival is actually a series of concurrent events, designed to take visitors back in time to an 18th Century Trade Faire and a Cherokee Indian encampment.

The 18th century Trade Faire at Fort Loudoun will feature encampments of soldiers, settlers and Native Americans.  There will be demonstrations throughout the day in artillery and musketry, along with battle and skirmish re-enactments.  Merchants and artisans will be on hand to peddle food and wares reminiscent of the time.

Music and other entertainment acts will include The Traveling Caudells, a traditional vocal duo; Out of the Ordinary, featuring a hammered dulcimer, English guitar, harp and vocals; and the Beggar Boys, talented singers and fiddlers. Common Stocks Curious Booth of Wonders and the Amazing Juggling Budabi Brothers will also delight and astonish visitors of all ages. Returning this year will be Faire Wynds Circus, featuring musicians, a conjuror, equalibrialist, contortionist and an escape artist – just a few highlights of their whimsical act.  You can attend an entertaining and educational presentation as Steven Caudill portrays Daniel Boone of Kentucky and historic re-enactor Cpt. Robert K. Rambo (Ret) portrays Attakulkulla, powerful peace chief of the Cherokee Nation, c. 1715-1780.

Meanwhile, the Festival at the Sequoyah Birthplace Museum, visitors will have the opportunity to experience Native American food, arts and crafts demonstrations, music and dance. Special demonstrations and displays will include a look into the Cherokees’ military service including Civil War encampment and battle re-enactment featuring Thomas’ Legion and a Cherokee timeline encampment featuring time periods of the 1400s through the 1900s. Take a stroll back in time and visit the Civil War encampments. Meet Miss Cherokee.  Special entertainment will be provided by the Warrior Dancers of Ani-Kituhwa, Diamond Go-Sti, a native educator and culturalist, Cherokee flutist and storyteller Eddie Bushyhead, a Cherokee Stickball demonstration game.  David Haggard from the Tennessee’s Wildlife Birds of Prey program will be on Saturday.  Sunday we will have the Cherokee Historical Association’s presentation on the Seven Clans.

The new 1809 Cherokee log cabin-style Blacksmith shop will be open for demonstrations on both days.   Other activities include a poster contest featuring children from the Cherokee Elementary School in Cherokee, North Carolina.  Darts, beads, talking sticks, face painting and free Cherokee name cards, and Cherokee games will be available for children.  Traditional Indian Fry bread and Indian tacos, fresh squeezed lemonade, kettle corn, along with other food and drinks also will be sold.

For more information about the Great Island Festival, contact the Sequoyah Birthplace Museum at (423) 884-6246 www.sequoyahmuseum.org or Fort Loudoun State Historic Park at (423) 884-6217 www.fortloudoun.com .