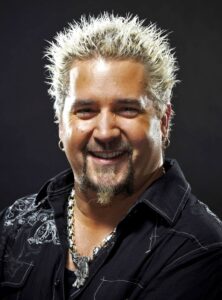 After the success of last year’s Guy Fieri Road Show, celebrity chef, restaurateur, best-selling author and TV personality Guy Fieri will once again bring his zest for life and unique culinary style to venues across the U.S.  Set to arrive at Harrah’s Cherokee Casino & Hotel at 8pm on Thursday, May 19, the Guy Fieri Food Tour presented by the National Pork Board  will mix the best elements of a live cooking show, the fun of a variety revue, and the non-stop adrenaline rush of a rock concert.  Fieri will take center stage with an unscripted and wildly entertaining performance—complete with interactive cooking stations, secret tips and dishes from his forthcoming cookbook (Guy Fieri Food, due May 3rd), as well as behind-the-scenes stories from the road, and much more.

Tickets for the Guy Fieri Food Tour presented by the National Pork Board  in Cherokee are now on sale and can be purchased through Ticketmaster outlets, Ticketmaster.com, or charge-by-phone at 1-800-745-3000.  Tickets are subject to applicable service charges and event time and date are subject to change.   A limited number of VIP tickets will be available in two package levels for the tour. The “Off Da Hook” Package includes: premium onstage seating; a chance to sample the food prepared by Fieri; tour laminate; a copy of Fieri’s upcoming book, Guy Fieri Food; a pre-show meet and greet with Fieri (must be age 21 or older to purchase this package) and more. The “Kulinary Krew” Package includes: prime orchestra seating; tour laminate; a copy of Guy Fieri Food; a pre-show meet and greet with Fieri and more. Updated tour and ticketing information can be found at www.guyfieri.com <https://www.guyfieri.com/> .

Australia-based flair bartender Hayden “Woody” Wood, entertainer and author of The Liquid Kitchen, will serve as the show’s opening act and onstage mixologist.  L.A.’s DJ Cobra will spin the show’s soundtrack from the comfort of his wild, orange fur-covered DJ booth, starting with the customary introduction of Fieri to the rocking theme of Motley Crue’s “Kick Start My Heart.”

A best-selling author and restaurateur, Fieri is best known as the host of NBC’s hit primetime game show Minute to Win It.  He also appears on four popular shows on the Food Network, including Guy’s Big Bite; as well as Diners, Drive-ins and Dives, where he travels across the country to find the most original and delicious food that America has to offer; the special series Tailgate Warriors; and as a guest judge on Next Food Network Star.

In 2008, Fieri released his first book, Diners, Drive-Ins and Dives: An All-American Road Trip…with Recipes! In its first week, it landed on the New York Times Best Sellers List. In 2009, he followed with a second “Diners” book, which also hit the Best Sellers List. On the Guy Fieri Food Tour, Fieri will take the recipes from the page to the stage and feature preparation of key dishes from his upcoming cookbook Guy Fieri Food (William Morrow, an imprint of Harper Collins).