The EBCI Governing Document Review Committee has begun meeting.  Per a resolution submitted by Painttown Rep. Terri Henry, the committee is to review the Tribe’s “Governing” documents and at the end of the ten week period report to their findings to Tribal Council along with their ideas for a course of action for the Tribe to take. 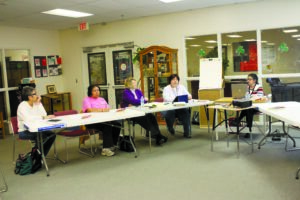 Sarah Sneed, an EBCI tribal member and attorney, is the paid facilatator who will be overseeing the ten meetings to make sure the committee understands any questions they have of any legal terms as well as setting the agenda for each meeting.

At the first meeting, the Committee was taken back in time to before European arrival and discussed how the Cherokees lived and governed themselves. It was brought up that the Cherokees were a matrilinal society.  Everything was owned by the women.  Clans were maintained through the mother’s side of the family.

The second meeting brought the committee into the 1800’s as they began going over treaties and discussed how the Cherokees were treated by the federal and various state governments.

The meetings, which are open to the public, will be every Thursday beginning promptly at 5pm at the Qualla Boundary Library. On Thursday, March 31 the Committee will go to the Senior Center in Snowbird at 6pm and then on April 21 to the Cherokee County Senior Center at 6pm.

For more information, contact Robin Swayney at the Qualla Boundary Library 497-1762 or come to the next meeting.