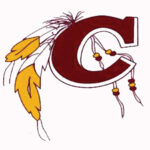 Bird, the number two seed in the 189lb. division, got a first-round bye and then pinned Jared Turbyfill (Swain) at the 1:57 mark to advance to the semifinals where he pinned Matthew Parce (Hendersonville) at the 5:29 mark.  Bird won a major decision (20-8) over Geno Guilyard (Bishop McGuinness), the number one seed, to win the championship.

In a battle of EBCI tribal members, Christian Crowe (Swain) pinned Sam Wahnetah (Andrews) at the 2:57 mark to win the 285lb. division.  Both advance to the state tournament.

With an overall team score of 70, Cherokee placed 9th out of a total of 22 teams in the field.  West Wilkes took the team championship with 207 points followed by Bishop McGuinness with 167 and Mitchell in third place with 128.

With 97 points and a fourth place finish, Robbinsville was the highest ranking Smoky Mountain Conference team.  They were directly followed by Murphy with 88 and Swain with 85.5.

Other Cherokee results are as follows: