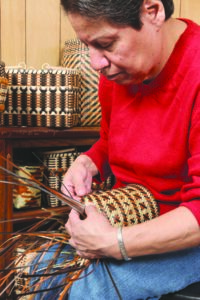 Indian artists who embody Collective Spirit® — “that which manifests self-awareness and a sense of responsibility to sustain the cultural fabric of a community”.  Each honoree is recognized with a $5,000 no-strings-attached fellowship.

According to Tonya Carroll, Outreach Worker at Qualla Arts & Crafts Mutual, who nominated her, “We are strongest when our culture is being practiced, and it is the dedicated few like Lucille who work so hard to ensure that our traditions will be preserved.  Ms. Lossiah not only helped me learn to make baskets but she also helped teach me to be proud of myself, my work, and my Cherokee culture.”

Not only is Lucille Lossiah one of her tribe’s most skilled basket weavers, she is also carrying on a very important tradition by teaching young people the art form and the importance of keeping it alive.  Lucille makes one of the oldest styles of Cherokee baskets by stripping her own cane and using natural, homemade, dyes.  She is a master at her craft and can work with all traditional Cherokee materials and dyes.

Lucille has taught many classes to different skill and age levels for the past ten years, dedicating her time to ensure that her precious knowledge is passed on to other tribal members.  She says, “Basketry is a form of therapy that also connects the people with their culture.”

First Peoples Fund’s President, Lori Pourier (Oglala Lakota) explains that Community Spirit Award honorees are chosen not only for artistic excellence but for exemplifying indigenous values of generosity, wisdom, respect, integrity, strength, fortitude and humility.  “Each artist exemplifies Collective Spirit® which moves each one of us to stand up and make a difference, to pass on the ancestral knowledge, or simply extend a hand of generosity”, she said.

Honorees were nominated for the national award by members of their own tribes and were selected by an independent panel of American Indian cultural leaders.  This year’s panel of reviewers included:  David Cournoyer (Oglala Lakota) Board of Directors for First Peoples Fund;
Richard Zane Smith (Wyandot) 2010 Community Spirit Award honoree; Susana Geliga (Lakota/Taino); and Tina Kuckkahn, (Lac du Flambeau Band of Lake Superior Chippewas) of the Longhouse Education and Cultural Center.