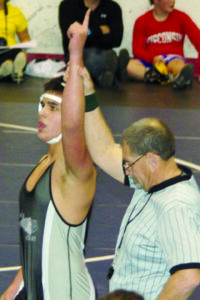 McCoy went into this State Tournament undefeated as the Smoky Mtn. Conference Individual Champion in the 173lb. weight class.  He finished this season with a record of 18-0 with 13 pins.  He wrestles for Robbinsville Middle School where this year’s team was the Dual Team Smoky Mtn. Conference Champions and the SMC Tournament Champions.  The Black Knights enjoyed this victorious season under the coaching of Billy Knight.

McCoy is no stranger to State Championships as he has three previous Free Style NC State Titles. He is the son of Skooter and Michelle McCoy and resides in the Birdtown Community.