MMA: An Interview with Isaiah Chekelelee 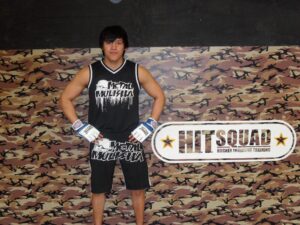 Isaiah Chekelelee, an EBCI tribal member from the Snowbird Community, has his sights set on a career in mixed martial arts. (DAWN ARNEACH/One Feather contributor)

Isaiah Chekelee, an EBCI tribal member from the Snowbird Community, has his sights set on the mixed martial arts world.  The son of Eve and Alan Chekelelee, Isaiah hopes to follow in the footsteps of fellow Cherokee Dan “The Handler” Hornbuckle who is setting the MMA world on fire. Following is a One Feather-exclusive interview with Chekelelee.

Q: How did you get into mixed martial arts?

One night my family and I were watching UFC (month of January) on TV and it looked fun, so while we were watching that night I found a promoter and emailed him and said, “Hey, I want to fight,” and later that night he said I would be fighting for him in Lawrenceburg, Tenn. on Feb. 27, 2010.

Q: Where do you train? How did you get there?

Currently at H.I.T. Squad in Granite City, IL. I watched UFC 117 and Matt Hughes had just dominated his opponent and I knew that he had a gym called H.I.T. Squad so I Googled it and found out they have dorms for fighters to stay in at a reasonable price so I thought why not? I’m going to start supplementing my time at H.I.T. Squad with some training at a place called Belleville Judo Club up here in Illinois.

Q: Do you have a favorite fighter you look up to?

Yoshihiro Akiyama! He’s a judo guy that likes to stand and trade and puts on great shows!  I like to consider myself a smaller version of him.

Q: Do you have a favorite move or submission?

Q: How long have you been training? How often do you train?

Since September,so about 5 months. Training up here is insane! I typically go to 2-4 training classes a day and counting my strength and conditioning I train around 4-6 hours a day.

Q: Have you had any fights? What is your record?

I have had four. My record is 1-3.  It’s a bit deceiving because one fight ended at the end of the 1st round due to an injury to me in a fight in which all the judges said I was clearly winning.  I almost knocked the dude out in the 1st 10 seconds. Also, three of those fights happened when I had no training at all, but now I’m training things should get turned around.

Q: Are you studying anything else to help improve your fighting?

Q: Do you prefer stand up or are you a ground fighter?

Previously, I liked to stand, but I have improved so much in wrestling my game plan is to take fights to the ground now.

Q: Why do you fight?

Simply for competition….and the ladies! hahaha

UFC, Bellator, or Strikeforce. And, I would like to own my own gym.

Q: What do you have to share with other up and coming fighters?

Make sure you have the right kind of training before you start.

Q: If you could have a fight with any MMA fighter who would you fight?

Q: Do you have any fights planned for the coming year?

My next fight is in April in Athens, GA. I have not been given the exact date, but I may take a fight in Kentucky in March.

Q: I saw where a fight was scheduled for you but was canceled because you and the other guy could not get close enough in weight.  How do you feel about trying to lose weight for fights?

I hate cutting weight! I only cut 4-6 lbs. I’m a very small Lightweight (155lbs), but I may eventually drop down to Featherweight(145lbs).

Q: Do you have someone helping you to get fights lined up? How are you getting your fights?

No, I line fights up myself. I’m looking for a good manager though. I don’t recommend to anyone to find fights themselves.  There will be promoters to set you up for a fall!

Q: Another enrolled member of the tribe has come out strong on the MMA fight scene, how do you think he will do this coming year with Bellator?

Dan “the Handler” Hornbuckle! He has his work cut out for him this year. This Bellator welterweight division is stacked! But, his record speaks for itself.  I’m sure he will be just fine…EBCI baby!!