The 4-H Native American Craft Club met on Monday, Feb. 7, and Matilda Calhoun, known on the Qualla Boundary as one of “The Reed Sisters”, was gracious enough to share her secret to making delicious beanbread.  The children had a hands-on experience from start to finish. 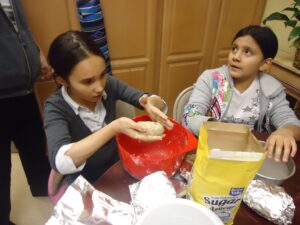 Jalen Motola and Samantha Cole were the “sifters”.  They helped Matilda prepare for the class by sifting and bagging exactly 2 cups of cornmeal at a time for each of the members attending the class.  This proved to be tedious but fun none the less.

Matilda set each child up with a spoon and two bowls. One bowl was for their cornmeal and the second bowl was filled with cold water.

Frances Reed, a tribal elder, was in attendance.  She sat with the children, looked at the cornmeal and scooped self rising flour out of the bag and into the bowl of cornmeal.  She was trying to gauge the amount needed for there is no real recipe when making beanbread.  Over time, beanbread is a skill that gets better through practice. 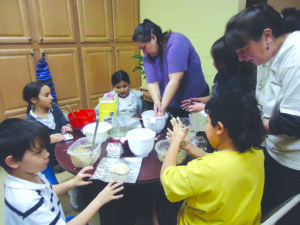 The group dives in.

After looking at her mixture for a few seconds, Frances scooped up a bit more self rising flour, adding it to her cornmeal.  She handed the cup to the 4-H’er next to her, Winston Welch, pointing  to the cup and directing him to fill the cup halfway with flour and pour it into his bowl of cornmeal.

After everyone had their cornmeal and flour mixture, Frances poured a small amount of baking soda into the palm of her hand, about the size of a quarter, and added it to the mixture.  Each of the children passed the baking soda around and measured as they were instructed, using the palms of their hands.

Matilda picked up a scoop of the beanbread mixture, rolled it into a ball, quickly patted it out, and then she dropped it onto the sheet of aluminum foil.  She folded the aluminum foil tightly around the beanbread to prepare the beanbread for the cooking process.  She told the children to work quickly because the mixture is very hot, instructing them to cool their hands off in the bowl of cold water while working with the mixture.  The children needed only a small amount of assistance from their parents.  They quickly began rolling, patting, and folding up their own pieces of beanbread art.

After all the children had their beanbread folded neatly inside the aluminum foil the parents placed their child’s beanbread into a pot of boiling water.   The beanbread boiled for twenty five minutes.  Once completed, the children tasted their beanbread creations and even had enough to take home to share with their family and friends.

The 4-H Native American Craft Club related they would like to thank both Matilda and Frances for donating their time and knowledge.  This class will also be taught to the children in the Snowbird Community on Tuesday, Feb. 22.