Braves lineman Buster Arch is going from Maroon and Gold to Purple and Gold.  He signed a Letter of Intent on Friday, Feb. 11 to play football this fall for the Haskell Indian Nations University Indians. 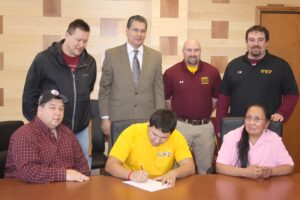 “It feels good and I just want to succeed in life and go off and go to school and see what I can do,” said Arch.  “It’s a big opportunity and I’m glad I get to go.”

Arch related that Haskell coaches have not set a definite position for him yet, but he said they are looking for linemen which is right up his alley having played four years at the position – both offense and defense – for Cherokee.

“I’m just proud of him and I hope to one day see him playing in the pros,” said Buster’s father, Bill Arch.  “He’s been a really good boy and is almost a grown man now, and I hope he does good out there.” 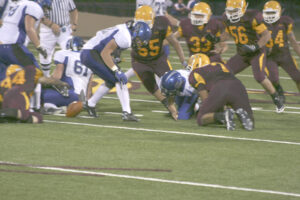 Arch (#55) prepares to pounce on a fumble against Smoky Mountain this past year. (SCOTT MCKIE B.P./One Feather)

Braves head football coach Craig Barker commented, “We’re really excited for Buster to be given an opportunity to extend his playing career.  He is a great kid and is going to be a definite asset to the Haskell football program, and I’m looking forward to his future.”

He added, “It’s just great for our program to have a couple of kids going on to the next level, and we’re just as excited as we can be.”

Haskell is a NAIA (National Association of Intercollegiate Athletics) school.  Over the past three seasons, they have posted a 6-25 record including going 1-9 this past year.