Megan Walker, an EBCI tribal member, has signed to play softball at the University of Alabama in Huntsville (UAH) as a catcher this fall. 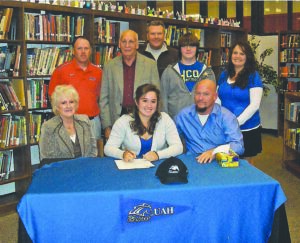 Walker currently attends Daniel Boone High School in Gray, Tenn. where she is a four-year varsity starter for the Lady Trailblazers softball team at catcher and third base.   She was named to the Honorable Mention list for the 2010 All-NET Softball Awards.

Walker maintains a 4.0 GPA and holds offices in the BETA Club, National Honor Society, HOSA and Student Council.  She is the daughter of Jeff and Amy Walker of Jonesborough, Tenn. and the granddaughter of Elmer and Ann Walker of the Birdtown Community.

UAH is a Division II school in the Gulf South Conference.  They have made several appearances in the Division II World Series.  The Lady Chargers finished last season with a 41-12 record and have been ranked #10 in the pre-season poll by the National Fastpitch Coaches Association.