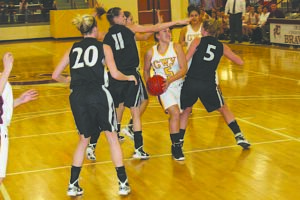 The Cherokee Lady Braves are currently 8-1 in the Smoky Mountain Conference and 14-3 overall.  They were set to play Highlands at home on Tuesday, Feb. 1, but the result of that game was not available by press time.

The Lady Braves took second place in a Christmas Tournament in Florida.  Rayna Davis and Paige Jackson were named to the All-Tournament Team.

Below are the results and stats from the Lady Braves from mid-December: