Bats play a significant role in the natural world and this biological function is being threatened by a disease that has already killed off millions of bats in the northeast United States.  A new podcast recently released by Great Smoky Mountains National Park describes Park bat and cave resources and the potential threat of the often fatal disease known as white-nose syndrome (WNS) to its bat populations.  The in-depth podcast, produced by Great Smoky Mountains Association, is posted on the Park’s website https://www.nps.gov/grsm/photosmultimedia/wns-bat-video.htm. 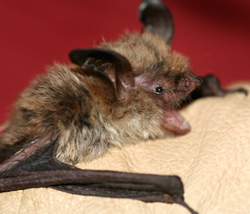 A researcher holds a Northern Long-eared Bat captured during surveys of bat populations in the park. (ANN FROSCHAUER/NPS PHOTO)

In addition, a new bat exhibit has been installed at the Park’s Sugarlands Visitor Center, giving visitors a chance to learn about these often misunderstood mammals.

“The educational materials provide a wealth of information on bat biology, their roosting and foraging behavior, the potential implications of WNS and what researchers and biologists are doing to manage this threat, as well as how the public can help protect bats,” said Bill Stiver, Park Wildlife Biologist.

The Park is home to at least 11 species of bats, a primary group of flying mammals that play a critical role in the health of ecosystems by consuming forest and agricultural crop insects—such as moths, beetles and mosquitoes.  One of the species in the Park, the Indiana bat, is federally endangered  and another, the Rafinesque’s big-eared bat, is a state listed species of concern in both Tennessee and North Carolina.   In the winter of 2010, two little brown bats in a Park cave tested positive for a newly-described fungus, Geomyces destructans, which is thought to be the cause of WNS, a symptom that appears on the faces of bats as a white frothy substance.

In an effort to prevent the unintentional spread of the fungus by people, the Park closed all of its 16 caves and two mine complexes to public entry in 2009.  The Park’s caves serve as important hibernacula (place of rest) and the closure is still in effect as researchers try to understand how the disease is being transmitted from bat to bat and from cave to cave.  Violators face fines of up to $5,000 or six months imprisonment.

WNS was first detected in the Northeast in 2006 and is quickly spreading south and has been found in cave systems as far west as Oklahoma.  According to biologists from the U.S. Fish and Wildlife Service, WNS is taking a heavy toll on bats that hibernate in caves and mines and has the potential for wiping out federally-endangered species such as the Indiana bats and even more common species of bats such as the little brown bat.

Scientists theorize that the fungus irritates the bats, making them restless and causing them to wake early burning precious fat reserves needed during winter hibernation.  They speculate that the affected bats could freeze to death or starve before the insects on which they feed emerge in the spring.  There is still much to be learned about WNS.  Fish and Wildlife Service officials say that no human illnesses related to the disease have been documented, but humans could certainly feel the effects of losing entire bat species which help to keep insect populations in check.  One little brown bat can eat up to 1,000 of those pesky mosquitoes in one hour.

The National Park Service is taking an active role in developing monitoring and surveillance strategies and containment protocols for its caves.  The Great Smoky Mountains National Park is cooperatively working with other parks and federal, local and state agencies across the country to protect bats and manage cave habitats.    Ongoing research in the Smokies includes monitoring bat populations in the winter during hibernation and tracking bats in the summer to determine habitat use.  Park biologists are taking additional steps to better understand bat populations and their habitats to help officials identify potential impacts of this fungus on the Smokies resources.   This winter biologists will test other bat species for the fungus.

Park managers are also asking visitors to help biologists monitor bats by reporting unusual bat behavior, appearing out of season, or one that appears to be sick or injured. For human safety, it is important not to touch or handle a bat.  Reports on bat incidents inside the Park can be made to the Park’s visitor centers or a Park Ranger.   Unusual bat activity outside the Park should be reported to state wildlife agencies.