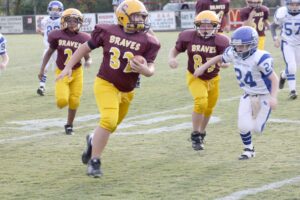 The Cherokee Mites are Cracker Bowl bound!  They defeated the Jackson Co. Mites 12-0 in a playoff game held at Andrews High School on Saturday, Oct. 23 to advance to the championship this Saturday.

The first half started out slow with both teams turning the ball over on downs once and punting twice.  Both teams had three “three and outs” in a half that was definitely a defensive struggle.

But, you just knew that something had to give.  And, it did…

Following a Jackson County punt, the Braves set up shop at their own 34-yard line with just over 30 seconds left in the half. 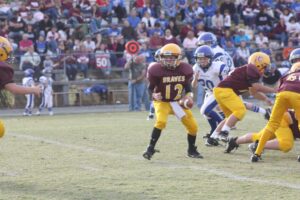 Ty Mintz (#12) pitches a ball during the third quarter. He scored the first TD of the game with just seconds left in the second quarter.

On first down, Ty Mintz cut up the middle, darted outside and was gone…66 yards later he crossed the end zone and the defensive struggle was over.  The two-point conversion failed and Cherokee took a 6-0 lead into halftime.

Jackson County got the ball first in the third quarter, but they turned it over on downs following their third three-and-out of the game.

Cherokee took over at their own 37-yard line.  On first down, Braves RB Issiah Bradley ran 19 yards to the Jackson Co.  44-yard line.

On the next play, he ran another 19 yards down to the 25-yard line, but a holding penalty negated that run.  The Braves continued pounding though and several plays later worked for a first down at the 18-yard line.

On first down, Bradley took it to the 5-yard line where the Braves set up for a first and goal. 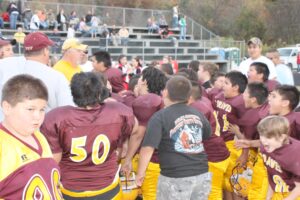 The Braves celebrate after their win on Saturday.

Two plays later, Isaiah Evans busted into the end zone from three yards out for Cherokee’s second score of the game.  The two-point conversion failed and the Braves led 12-0 with just under two minutes left in the third quarter.

Jackson Co.  started their next drive at midfield.  Their drive, which went into the fourth quarter, started out well and they worked it down to the Cherokee 14-yard line following a personal foul penalty.  But, a stiffened Braves defense combined with an intentional grounding call stifled their drive and they turned it over on downs again.

Cherokee punted on their next drive.  Jackson Co.  took over at their own 39-yard line to begin what ended up being a very odd drive.

They turned it over on downs and Cherokee was able to run out the clock to secure the win and a place in Saturday’s Cracker Bowl against the Murphy Bulldogs.

Photo gallery of this event: