Thousands of runners from across the country will converge in Washington, DC on Halloween Day (Sunday, Oct. 31) for the 35th Marine Corps Marathon and several runners from the Cherokee Runners group will be in the pack.  A total of six members are planning to run in the event including:  Gerri Grady, Robin Swimmer, Stephen Swimmer, Chris Reed, Jimmy Oocumma and Brian Burgess. 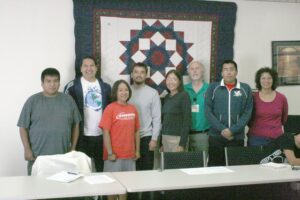 “The Cherokee Runners that are participating in the 35th Marine Corps Marathon are a diverse group from all age groups and walks of life,” said Grady, an EBCI tribal member and member of the group.  “Each one has trained at his or her own pace with the encouragement of the entire group as well as from all of our families and the Tribe.  We will represent the Eastern Band of Cherokee Indians with pride.”

The 26.2 mile race will start near Arlington Memorial Drive and wind through the streets of Washington.  Grady related that a 10K race is also being held in conjunction with the event and the following Cherokee Runners are scheduled to participate:  Dawna Paul, Pam Sneed, Marlene Arch, Brian Driver, and Grady’s husband Sean.

Swimmer, president of the Cherokee Runners, ran in last year’s event, something he doubted was possible 10 years ago as he laid in a hospital room recovering from very serious injuries sustained in a parachute accident that occurred in Washington state while on a fire-fighting jump.

“It wasn’t until I met my wife Robin and started tagging along with her and her sister (Gerri) to races that the spark was rekindled for me to get back involved with running,” he said.  “So, when we all decided to set goals for each other, I mentioned how I had always wanted to run the Marine Corps Marathon with all my fellow Marines that didn’t make it back home from the war with me.  My family talked about it and decided that this would be the goal we all should shoot for.”

They ran, and they finished.

“We vowed to do it again,” Swimmer said.  “This time, with the spread of news from family and friends about the race, we were able to entice several more members from the reservation to take up the challenge with us.”

The marathon is one of the most grueling events in all of sports and training takes many hours pounding the pavement in preparation.

Swimmer said training for this event is what initially spurred the interest to start the Cherokee Runners.  He said he began slow and started with walking for 20 minutes a day and then increased that to running 20 minutes a day.  Soon, he found he could run the length of the entire Oconaluftee Trail (approx. 3 miles).

“Anyone can do this,” he said.  “What’s so neat about running the bigger races is that everyone has the same goal which is just focus on making it to the finish line – walk, run, or crawl.  One of the biggest obstacles is getting over the competitive feeling of placing first.  In this endeavor, it’s all about pushing your own limits.  You don’t have to worry about finishing last…everyone finishing is treated as a winner.”

He concluded with, “So, as a former Marine, I say come take up the challenge.  Run…”