Cherokee put the ball on the ground eight times and lost six of them as they lost 52-12 to Swain at Ray Kinsland Stadium on Friday, Oct. 15.  The Maroon Devils’ Colby Hyatt ran for four touchdowns and threw for another as Swain outgained the Braves in total yards 369 – 199. 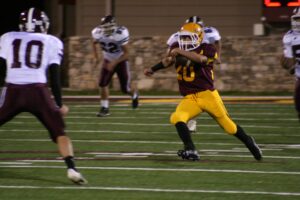 Greg Bradley returns a kickoff 99 yards for a score in the first quarter of Friday's game. (Photo by Dawn Arneach/One Feather)

Swain took the opening kickoff and started at their own 34-yard line.  They put together an 8-play, 66-yard drive ending on a 3-yard touchdown run by Hyatt.  Evan Sneed, an EBCI tribal member, kicked the extra point and Swain led 7-0 at the 8:07 mark in the first quarter.

Cherokee had some bad luck on the ensuing kickoff as Walkingstick had problems finding the handle and fumbled out of bounds at the 1-yard line.  The Braves got an illegal procedure call on first down which backed the ball up to about the 2-foot line. 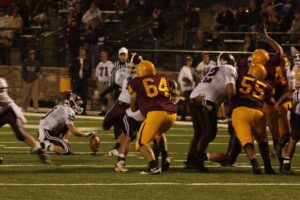 They were stopped with no gain on the subsequent first down, and Cherokee QB Jesse Blanton mishandled the ball on second down.  Swain defensive lineman Jacob Wildcatt, an EBCI tribal member, recovered the ball in the end zone for Swain’s second score.  Sneed added the extra point and Swain extended its lead to 14-0.

But, the Braves wouldn’t quit.

In what was arguably one of the plays of the season for Cherokee, Greg Bradley fielded the kickoff at his own 1-yard line.  He moved right and then quickly darted left, found a hole, went up the left sideline and 99 yards later was in the end zone.  The two-point conversion was no good and Swain led 14-6 with seven minutes still left in the first quarter.

Following a Braves personal foul penalty on the ensuing kickoff, Swain started their next drive at the Cherokee 49-yard line.  Following runs by Hyatt of 19 yards and 15 yards, the Maroon Devils found themselves with a first and goal from the Cherokee 5-yard line.

Cherokee’s defense tightened up and held them out of the end zone following two incomplete passes on second and third down.  Swain settled for a field goal which was booted through the uprights and onto the roof of the Field House by Sneed.  With 4:42 left in the first, Swain led 17-6.

Swain got another break on the kickoff as several Braves players thought it was going to bounce out of bounds, but footballs never bounce the way you expect and a Swain player pounced on the ball.

Two plays later, Hyatt was in the end zone again – this time on a 3-yard run.  Sneed’s extra point made it 24-6 with three minutes left in the first quarter.

Cherokee was forced to punt on their next possession and Swain started at the Cherokee 45-yard line.  Two plays later, Hyatt hit Matthew Maennle on a 23-yard touchdown pass.  Sneed added the extra point and Swain extended its lead to 31-6 with 1:36 left in the quarter.

Swain kicked the ball out of bounds on the kickoff and Cherokee started at its own 35-yard line.  On first down, Walkingstick electrified the crowd as he took off on a 65-yard touchdown run.  The two-point conversion failed and Cherokee trailed 31-12 at the end of the first quarter.

Swain started their next possession at their own 30-yard line and put together an 8-play, 70-yard drive which culminated in an 8-yard touchdown run by Hyatt.  Sneed added the extra point and the Maroon Devils led 38-12 with 8:54 left in the second quarter.

With all of the scoring in the first, that was the only score in the second quarter and Swain took that lead into the locker room.

Cherokee’s first possession of the second half ended as they turned it over on downs at the Swain 26-yard line.  But, they would get it back quickly as Hyatt fumbled the ball which was recovered by Cherokee’s Corbin Wright at the Swain 33-yard line.

Four plays later, Walkingstick would lose the handle and Swain would recover at their own 19-yard line.

Cherokee held them and Swain was forced to punt, but Bradley lost the handle on it and Swain recovered and set up shop at midfield.  Four plays later, Hyatt would score his fourth rushing touchdown of the night on a 38-yard run.  Sneed’s kick was good and Swain led 45-12 with just over a minute left in the quarter.

Swain would go on to score again in the fourth quarter as the Maroon Devils’ Dylan Rose picked up a Blanton fumble and returned it 50 yards for the score.  Sneed added his seventh extra point of the night as Swain took the win 52-12.