Braves open with win over ‘Stangs 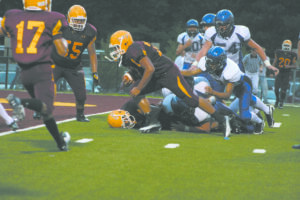 Offensive lineman Justice Littlejohn (#72) picked up a fumble and ran it in from one yard out to score during the first half. (Photos by Scott McKie B.P./One Feather)

The Cherokee Braves started off Craig Barker’s head coaching career on a positive note with a 22-15 win over the Smoky Mountain Mustangs at Ray Kinsland Stadium on Friday, Aug. 20.

Smoky Mountain actually got on the board first following an interception return to the Cherokee one-yard line.  Drew Londo grinded his way in for the score and Jarrod Couch added the extra point as the Mustangs took a 7-0 lead at the 1:25 mark in the first quarter.

Cherokee took care of all of its scoring in the second quarter on long runs by Greg Bradley and Dorian Walkingstick and a heads-up play by lineman Justice Littlejohn. 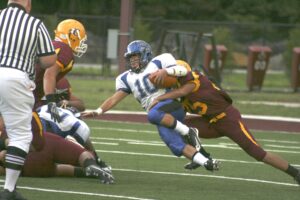 In a lineman’s dream, Littlejohn picked up a Cherokee fumble at the one-yard line and rumbled in for the score.  In addition to being a defensive end, he also has a foot and handles kick-offs for the Braves.

Following a Braves fumble recovery at midfield, Bradley, who gained 113 yards on 6 carries, jaunted 50 yards for his score with two minutes left in the quarter.

With only 21 seconds left before the half, Walkingstick got loose (and once he’s loose, he’s loose and won’t be caught) and ran 71 yards for the score.

The third quarter opened with Smoky Mountain missing a short field goal after driving to the Cherokee 8-yard line.  Both teams exchanged punts and ate up most of the quarter on short runs and incomplete passes.

Walkingstick ignited the crowd again at the start of the fourth quarter with a dazzling 43-yard run into the end zone, but it was taken away following a Cherokee penalty.  Several plays later, Cherokee fumbled and the Mustangs took over from their own 21-yard line.

Fourteen plays later, Smoky Mountain would get into the end zone again as Tyler Chance would catch a 5-yard pass from Londo.  They would also convert on the two-point play as Londo hit Beckett to make it 22-15.

With a little more than two minutes left, the onsides kick loomed.  It came, but was unsuccessful for the Mustangs and Cherokee started at their own 49-yard line.

Following a four-and-out and a Braves punt, Smoky Mountain found themselves down by 7 points and starting from their own 31-yard line with time running out in the game.

But, it was not to be.  With 15 seconds left, Braves free safety (and QB) Jesse Blanton intercepted the ball to secure the win for Cherokee.

On the game, Cherokee ran the ball 47 times for 364 yards and only three the ball three times for a total of 12 yards.