Hornbuckle improves to 22-3 with win over Blackburn

CHICAGO – Dan “The Handler” Hornbuckle improved his mixed martial arts record to 22-3 by winning a unanimous decision over “Bad” Brad Blackburn at Bellator 25.  The EBCI tribal member draped the tribal flag over his shoulders as the unanimous decision was announced at The Chicago Theatre on Thursday, Aug. 19. 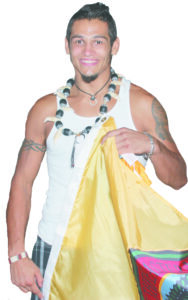 “Dan Hornbuckle wanted the toughest fight we could provide him as soon as possible after his loss to Ben (Askren),” said Bellator CEO/founder Bjorn Rebney.  “Brad stepped up and these two gave us a back and forth that was undeniably the fight of the night.”

Hornbuckle won the three-round fight by the judge’s score of 29-28.

Uncharacteristic of some of his recent fights, this one stayed mostly off the ground and involved lots of strikes by both fighters.  The second round provided some sparks as Hornbuckle took a kick to the groin following a missed inside kick by Blackburn.  The fight was only delayed a few seconds though as Hornbuckle was up and ready to go soon thereafter and actually knocked Blackburn down just before the bell in the second round following a flurry of body kicks and jabs.

Coming out smiling for the third round, Hornbuckle continued to use his reach and height advantage to land jabs and body kicks to take the judge’s scorecard and the win.

Information on Hornbuckle’s next scheduled fight is not yet available.