The artwork for billboards PETA has put up around western North Carolina deriding Cherokee's bear parks. (Image courtesy of PETA)

PETA (People for the Ethical Treatment of Animals) is after the Cherokee bear exhibits again, and this time they’re taking their message to the highway.  They recently put up several billboards that state “Warning: Tourist Trap Avoid Cruel Bear Pits”.

PETA director Debbie Leahy said in a statement, “These animals are denied nearly everything that’s natural and important to them.  At Cherokee’s barren, boring bear pits, tourist dollars come first, and the bears’ needs don’t even register.”

Information from PETA alleges, “At Cherokee Bear Zoo, Chief Saunooke Bear Park, and Santa’s Land, bears are kept in barren concrete pits or crammed into small cages in which they pace back and forth, walk in circles, cry, whimper, fight with one another, and beg tourists for food.”

PETA recently put up billboards in the following locations:

Principal Chief Michell Hicks related, “We continue to support our local businesses that have chosen to offer an opportunity to the visiting public to view black bears.  We continue to monitor each operation to make sure they are compliant with Tribal laws and USDA standards.” 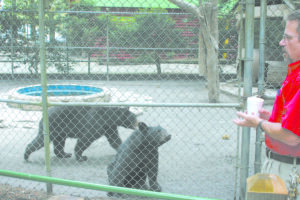 This issue is certainly not new to Cherokee.  It gained national attention a year ago when retired game show host Bob Barker became involved through PETA.  He made a visit to Cherokee and met with Principal Chief Michell Hicks and Tribal Council on Tuesday, July 28, 2009.

During that visit, Barker commented, “I don’t think you need bears.  Let the bears go into a sanctuary where they can live the way they were intended.  These pits are a miserable way for a bear to go.”

Last year, Ken Howell, manager of Santa’s Land Zoo, told the One Feather he welcomed anyone to inspect their operation.  “We all have a lot of hoops to jump through,” said Howell who related that the property spent in excess of $10,000 last year in expanding the play and demonstration area for the bears.  “We always do 10% better than the 100% required.”

He said the bears at Santa’s Land are fed on a meticulous schedule that has been approved by the zoo’s veterian and USDA officials.