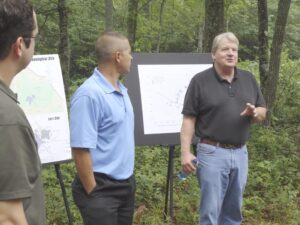 Principal Chief Michell Hicks made a visit to the site of Fort Armistead near present-day Coker Creek, Tennessee on Thursday, July 29.  He and Tribal Historic Preservation Officer, Russell Townsend, met with U.S. Forest Service officials and archaeologists who are conducting a limited exploration of the site.


The U.S. Forest Service purchased the site in 2005 from private land owners in the hopes of serving as long-term stewards of the site.  Chief Hicks and Cherokee National Forest Supervisor, Tom Speaks, reviewed site security measures and discussed the future of the site.  Fort Armistead is infamous for the role it played in the Cherokee Removal, but Russell Townsend and Archaeologist Brett Riggs demonstrated that the history associated with Fort Armistead goes far beyond its sad association with the Removal story.

For thousands of years, Cherokees had been using a trail network that crossed through the Unicoi Gap, allowing passage between the east and west sides of the Southern Appalachian range.  During the Colonial Period, this trail network became the main thoroughfare for trade between Charleston, Sc and the interior tribes.  At the time of the French and Indian War, the trail through the Unicoi Gap was improved to enhance communication between Fort Prince George and Fort Loudoun.  Following the American Revolution, Cherokees improved the trail yet again, turning it into a real road that would allow them to quickly drive their livestock to Charleston markets.  This road would become one of the Cherokee Nation’s first business ventures when the Unicoi Turnpike was established by the Tribe.  The Cherokee Nation received fees from people using the road, and from the licensing of way-stations along the route.  Maroni’s Stock Stand was one of the way-stations that was established at the western base of the mountains near present day Coker Creek.

In 1829, Gold was discovered in the northern Cherokee Nation, and white intruders began flooding the area around Maroni’s Stock Stand and disrupting Cherokee life as they illegally searched for gold.  At the request of the Cherokee Agent R.J. Meigs, the U.S. Army established a military post at the location of Maroni’s Stock Stand in an attempt to restore order.  The Post became known as Camp Armistead, and though soldiers manned the post for nearly 10 years, they would do little to restore order.

When the time for Cherokee removal came in 1838, the recently abandoned Camp Armistead would be re-garrisoned by U.S. Soldiers, and the abandoned post was transformed into Fort Armistead.  Fort Armistead would serve as a vital link between Winfield Scott’s Headquarters at Fort Cass and the isolated forts in mountainous western North Carolina.

In the early summer of 1838, 3500 North Carolina Cherokees were marched from Fort Butler in Murphy, North Carolina over the Unicoi Turnpike into Tennessee.  They would make a brief stop at Fort Armistead before moving on to Fort Cass.  Fort Armistead was finally abandoned when the Cherokee Removal was concluded.

Cherokee National Forest Archaeologist, Quentin Bass, stated that “Fort Armistead is a one-of-a-kind site.  All of the other Removal Period forts are either obliterated or are under the waters of lakes.  There is likely no better place to understand the Trial-of-Tears along its entire 800 mile length”.

Bass reiterated the need for tribal oversight in maintaining and interpreting the site.  “All three federally recognized Cherokee tribes will play a vital role in the future of the site”.

Russell is the Tribal Historic Officer for the Eastern Band of Cherokee Indians.