HAYWOOD COUNTY – It’s open!  The portion of Interstate I-40, closed since Oct. 25, 2009 due to a major rock slide, is now open for traffic.  The interstate officially re-open on Sunday, April 25 at 6pm, and a ceremony 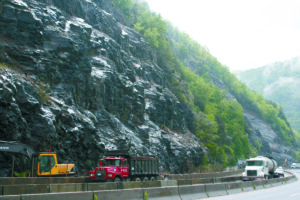 Traffic flows on the morning of Tuesday, April 27 on a section of I-40 near the North Carolina - Tennessee border that has been closed for six months due to a major rock slide. The road was officially opened by NCDOT officials on Sunday, April 25. (Photos by Scott McKie B.P./One Feather)

was held to mark the event at the Welcome Center near the North Carolina – Tennessee border in Haywood County on Tuesday, April 27.

NCDOT related the total cost for the project is around $12.9 million and officials said in a statement that the federal government would “reimburse” the state for almost all of that amount.

“I want to thank everyone who’s worked on this project,” said Jon Nance, NCDOT chief engineer who called it a “very complex type project.”

He went on to say, “This project was extremely challenging given the terrain and the high traffic volumes that depend on this route.”

Vice Chairman B. Ensley (right) meets with Conrad Burrell, NC Board of Transportation, during an event in Haywood County on Tuesday, April 27 marking the reopening of the road.

Conrad Burrell, NC Board of Transportation, commented, “I know firsthand the hardship the citizens and businesses of this area have endured as we’ve worked to reopen this highway.  I-40 is a lifeline for this region, and it was greatly impacted during some of the busiest times of the year.”

“We are delighted the section of I-40 that has been closed since October 2009 has now reopened,” she said.  “It is especially welcomed at the beginning of seasonal visits to Western North Carolina and to Cherokee.  Having I-40 West open will allow the leisure travel to choose the closest route to come visit all that Cherokee, NC has to offer.  We look forward to those visits to Cherokee.  We want our visitors to know they will be greeted with a warm welcome as it has been a long winter.”

According to the NCDOT, “55,000 cubic yards of rock were removed comprising 7,000 truck loads of material which would cover about 37 football fields in a 1-foot layer of rock.”

A total of 540 rock bolts were installed to help stabilize the area.
Trucks hauling wide loads (those over 12 feet wide) are still restricted from the route.