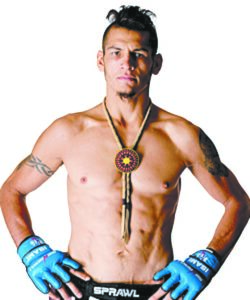 UNCASVILLE, Conn. – Dan “The Handler” Hornbuckle, an EBCI tribal member, advanced to the semifinals of the Bellator XV mixed martial arts tournament by submitting Tyler Stinson in a quarterfinal match on Thursday, April 22.  Hornbuckle (20-2) defeated Stinson (16-6) with a triangle choke at the 2:03 mark in the first round.

The welterweight fight was one of several on the card of the tournament being held at the Mohegan Sun.  Hornbuckle will face Steve Carl  May 20 in Dallas Texas.

“Lyman Good was in my place last year, so hopefully he knows that I’m on the path to get him,” Hornbuckle said after the fight as Good, the reigning Bellator welterweight champion, looked on from cage-side seats. “I want that title … I’m coming to get him.”

Thursday’s submission was more in tune with Hornbuckle’s jiu-jitsu style although he can also strike and actually received recognition for a head kick knockout of Akihiro Gono last year which was named Fighting Stances’ 2009 Knockout of the Year.

Hornbuckle trains at McVickers Martial Arts Academy and resides in Mahomet, IL with his wife Melody and three daughters.