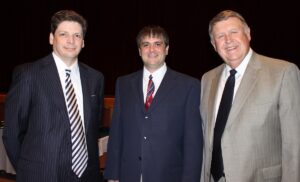 Superior Court Judge Brad Letts urged students to keep their dreams alive, no matter what the obstacles. Letts, an EBCI tribal member and a resident of Sylva, was the featured speaker during Southwestern Community College’s Academic Awards Ceremony Tuesday, April 6, on the Jackson Campus.

Letts talked about the Clint Eastwood movie Invictus based on the story of Nelson Mandela, who spent 26 years as a political prisoner. Mandela never gave up his dream of a united South Africa, Letts said, as he described how Mandela became president following his release from prison. To unite the apartheid-torn South Africa, Mandela enlisted the national rugby team on a mission to win the 1995 Rugby World Cup.

“Others may say your dreams are too fanciful or too hard to reach but they can’t extinguish your hopes and dreams. The only person who can do that is you. And I urge you to keep your dreams alive. You can achieve them; I firmly believe that,” said Letts, who assisted SCC President Cecil Groves in awarding certificates to the students honored for their academic performance.

Titus Laney of Cullowhee received the N.C. Community College System Excellence award and went on to represent Southwestern at the statewide awards ceremony in Raleigh April 14.

A member of the National Technical Honor Society and Vice-president of Southwestern’s Environmental Club, Laney was living in Wilmington where he suffered several severe injuries, was out of work for several months and depleted his savings. He sold his business, decided to pursue another direction and selected Southwestern.

Southwestern Community College student Chris Miglino of Cullowhee received an honorable mention for the Barry M. Goldwater Scholarship. The prestigious scholarship was established by Congress in 1986 to honor Senator Barry M. Goldwater, who served his country for 56 years as a soldier and statesman and senator. The paper for which Miglino received the honorable mention was a proposal on the use of chaos mathematics to more accurately predict tornadoes. Miglino, who has a 4.0 grade point average, is president of Southwestern’s math and science club and is currently dual enrolled both at SCC and at Western.

“I knew right away that Southwestern was the school for me. Everyone there has an optimistic attitude that is contagious. Their sense of pride is heartwarming. The faculty and staff are extremely supportive and resourceful and follow my progress. My physical ailments were lessoned by instructors, financial aid, Student Support Services and the SCC clubs,” said Laney, who received a Mensa scholarship.

“I feel prepared to succeed in whatever path I choose to follow. Southwestern opened the doors of success for me and it can for other students. They just have to take the initiative and walk through the door.” Laney is pursuing an associate of arts degree in college transfer.